10
The puncak, atas 10 Prettiest Females On The tampil
posted by KataraLover

Magic mirror on the wall, who is the fairest of them all?
I've been planning to do this for a long time and now I'm finally doing it. Even though I cinta the tampil I'm not a fan of the animasi style. So I don't find too many characters attractive. In fact the only male character I think is handsome is Ash. However there are some females I think are very pretty and some beautiful. So here's my list, please komentar telling me what anda think but keep in mind this is just my opinion.

Even though she's one of the most brainless characters on the tampil she's very pretty. Everytime I see her and she does something stupid I always say "It's a...
continue reading...
16
Ash's pikachu is a GIRL
posted by Merwolf
Over the years many people have asked the question, "what gender is Ash's pikachu?" Some say male, some female, and some say "it."

All through the years of my pokemon journey I have been studying the hormones of ash's pikachu and stand oleh what I have always believed, that ash's pikachu is a female. here is a daftar of evidence I have to support that.

1. pikachu has shown a great deal of female hormones such going crazy, being irritable, screaming, and snapping at others when upset, just like girls often do when upset, dealing with drama, and/or PMS'ing

(At the Carnival Picnic area, all the guys are sitting at one meja and all the girls are sitting at another table. Max arrives dirty, and drenched in red blood!)
May: Whoa Max! What happened?
Max: (In breath.) Joey kick….Flying…Barry's house!
(Ash and Misty comes up to the table. Misty is still a mess from the petting zoo incident!)
Tracey: Whoa Misty! What happened?
(After 15 sec. of telling them the petting zoo incident, all the people are hysterically laughing at her! Misty kicks Ash in the coconuts!)
Ash: Owww! (in the high pitched voice) Mommy......
continue reading...
puncak, atas 10 saddest moments in pokemon
posted by Pokegal4life
This daftar contains personal points of view, it's perfectly fine if anda don't agree with them. This daftar will contain possible spoilers if anda haven't seen the episode/movie the moment is from.

#10. Serena losing her first pokemon Performance in "A Showcase Debut"

Mew left down a metronome before I step on it.
I was walking halaman awal from school, I found a metronome and I stepped on it and it vanished. I knew that what it was. I was jumping in pain and saw a long berwarna merah muda, merah muda tail poking a hole through my pants. 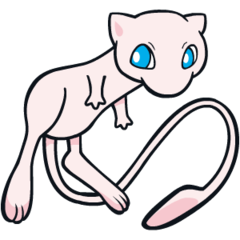 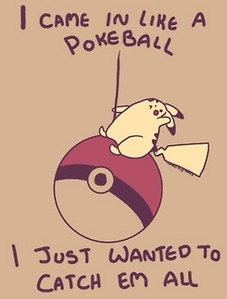 We clawed, we chained our hearts were low
I jumped with anda never knowing why
We fought, I fell under your spell.
A battle no one could deny

I came in like a Pokeball
I only wanted to catch them all
All I wanted was to break your walls
All anda ever did was beat me
Yeah, you, anda beat me

I put anda high up in the sky
And now, you're not coming down
It slowly turned, anda let me lose
And now, I'm on the ground

While...
continue reading...
Evidence Dawn's Pachirisu is a girl
posted by Pokegal4life

A picture's worth a thousand words and is also a great way to prove a point and get unknown facts straightened out. Here's proof that Pachirisu's a girl. There's a picture of Pachirisu from the episode "Tanks for the Memories". In that episode the gang stopped at a cafe where Brock was helping one of the waitresses bond with her Miltank, Ilta. While Brock helped her, Dawn, Ash and their Pokemon helped the other two waitresses inside the cafe during rush hour. One of the pictures below is from that episode. It's Pachirisu, Buneary, and Ambipom all wearing waitress outfits, and they all look super excited, as did Dawn. Now, think about how Ash, Pikachu, Piplup, and Turtwig looked, embarrassed, right? Exactly, and if Pachirisu were a guy, it's aman, brankas to say Pachirisu would've been embarrassed as well. Also, I have another picture of Pachirisu in a cheerleader outfit, and Pachirisu looks excited, and that probably wouldn't be the case if Pachirisu was a male.

2
The Nuzlocke (Creepypasta)
posted by TheSpartan9000
There was a held nuzlocke challenge somewhere that would decide who was the ultimate Pokemon master. Many entered and only one would leave alive! There was many people and they each got scared every time their Pokemon dies. It was only hari one of the nuzlocke and already tons have died. Some people got stressed and tried to escape but, ghosts of the dead challengers block the way out. One challenger managed to escape but dies later of an unknown supernatural related illness. After hari three the challengers started to get depressed of all the people who died. The ghosts now control the minds...
continue reading...
You Might Also Like...

video games
Pokemon Battle 2.0-Deleted Scenes
posted by AKetchum01
PKMN Battle 2.0 has been a work in progress since 2006 when I was menulis down a story with a totally different plot and characters! Since then, the plot has changed, there have been new Pokemon added, and other things happened.

The original version was based in Hoenn and started in Oldale Town. The main Trainer's starter was Treecko(My starter in Hoenn). There was no one else traveling with the other at the time(Unlike the current version). The first version was basically PKMN Emerald, just the same Pokemon I used were featured.

One of the first things I took out...
continue reading...
The Return of Melvin - A Master Quest fan Fiction
posted by 15sturmelle2
"Ash, Brock, and Misty were on their way through to Olivine City when they saw a mean woman throw Melvin out of his tent after failing to warm his audience up instead of cool them down. "How do anda except yourself to make an honest buck if anda can't preform in front of all those people? Honestly, i don't know why i hired anda to begin with. anda can't even make Pidgey appear from your hat with the touch of a wand". replied Melvin's manager "I just need some pratice to get it....." Melvin began to say before getting his hat thrown in his face as his manager walked off. Ash, Brock, and Misty arrived...
continue reading...
The Return of Mateo - A Master Quest fan fiction
posted by 15sturmelle2
Ash, Brock, and Misty were heading out on the Whirl Islands when they saw a girl out on the distance swimming near a whirlpool. Misty! Who's that little girl swimming near a whirpool? asked Brock Beats me. berkata Misty No. She's really swimming near a whirlpool. I think she could use some rescuing right about now. berkata Brock Right! I'm on it! berkata Misty Marissa! Hang on! I'm coming! berkata Mateo, rushing out at the right menit when he saw her in danger. Misty was closer and her and Staryu merpati in to save Marissa. Totodile! anda go too! berkata Ash, sending in Totodile Here! Grab a hold of this rope!...
continue reading...
1
I'm not sure how many people know this but there are book adaptations of the anime series in jepang
posted by NectariaKiritsi 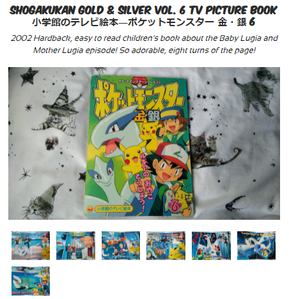 While I was searching to find lebih about the komik jepang adaptation of the Lugia movie, I have managed to find pictures of a Japanese book that is an adaptation of the Lugia episodes from the Johto series that I have found from this link which surprise me when I first saw it and I was very glad that Ritchie, Butch and Cassidy were presented in this adaptation unlike that adaptation from Ash & pikachu komik jepang that disappointed me because they didn't appeared in it at all. From what I have seen from the pictures, this look like a great adaptation to the original anime episodes and like the artwork...
continue reading...
2
The ORIGINAL Pokemon Live! Script
posted by AKetchum01 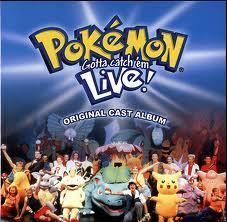 Someone's astonished by Ash's incomplete harem, hehehe...
The Valentine hari had officially passed, but we are still a couple years away from the end of the Pokemon anime. There will be plenty lebih action between now and that magical hari when Ash and everyone else on the tampil gets paired up with someone canonically. The ongoing XY series will undoubtedly shake things up, but for now, let's take a look the puncak, atas 10 shippings at the beginning of 2015.

IkariShipping first started back in the DP era, when Dawn and Paul spent a little time together alone with each other at night before been seen oleh Ash. Since then, this...
continue reading...
Most annoying characters in pokemon
posted by Pokegal4life
1. Paul

He's always calling Ash pathetic, when really, HE'S the one who's pathetic. He's nothing but a selfish, snotty, stuck-up, heartless, and cruel jerk. I can't stand him one bit. Once when I watched the episode "When pokemon Worlds Collide" and Paul berkata to Ash "You sound just like a little kid." my response was "He's only 10, and what's your excuse?" He doesn't deserve to be a pokemon trainer because he never even showed any respect to any of his pokemon atau was ever nice to them. He was especially cruel to poor Chimchar when it was still with him always putting it through tough battles...
continue reading...
3
populer Pokemon topics
posted by AninditaS
This artikel contains opinionated view so this is/may not be factual.

In No particular order, here:

Ash and Red
"Are they the same person?", the most common and the main discussion of this topic.
Though they are not but this pertanyaan has always been raised. They are also compared in their Pokemon training skills.

2. Mew vs. Mewtwo
Another topic which has been heavily discussed. Mew vs. Mewtwo is one of the most populer Pokemon comparison. With Mewtwo clearly having higher base stats than Mew, and also the highest base stats of the Kanto region, the other side still holds good....
continue reading...
4
Why hate on Dragon~Buster Georgia?
posted by StarWarsFan7 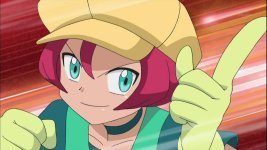 Georgia
You know, Georgia is only a Dragon~Buster and obsessed with beating Dragon type trainers because she was badly beaten at the village of Dragons! It must have been hard for her! The good news is, she's very self-confident! I have absolutely NO self confidence! XD Back to Georgia, she only wants to battle lebih challenging naga like Haxorus and Druddigon. She didn't really expect to go up against an Axew. And, she also won because of her Beartic. Georgia wants to be a successful Dragon Buster. For example, beating legendary naga and big dragons.

When she said: "That was easy. What a yawner."...
continue reading...
1
Five Reason Why Misty Is Not A Tomboy.
posted by pumpkinqueen
(add your own) 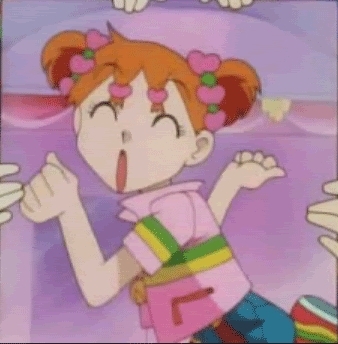 1. she is afraid of bugs and hurt caterpies feelings (tomboys like bugs)
2. she says Pokemon are cute every detik (what tomboy would do that?)
3. She wants to toko everytime there is a store (tomboys don't care about shopping)
4. She wears dresses sometimes (tomboys never wear dresses)
5. She gets the cutie eyes everytime she see water atau cute Pokemon (what tomboy would do what?)

No main girl on Pokemon are tomboys. Misty, May, Jessie, and Dawn are NOT tomboys. The only ones that are tomboys are Zoey and Iris (A little)
More Cards
1234567891011