Description/Summary: Post 1x13. With Serena out of town, Nate and Chuck rejecting her, Eleanor out of town on a business trip for a few weeks, Dorota taking a vacation, and the whole school hating her, Blair Waldorf felt as if she had no one to turn to, which leads her to a night of partying, drugs, and alcohol.

That’s when she met him. He seemed nice enough, so she accepted when he asked her to come upstairs to a private room with her. Big mistake. Something unspeakable happens to her, and she goes to the one person who broke her jantung the most: Chuck Bass.

Almost as if everything was forgiven and forgotten, Chuck didn’t care about the past anymore. He still loved her, just as she loved him, though neither of them would ever admit it out loud. He saw the state she was in; the bruises, blood, scratches, scars. Nothing else mattered. He made it his duty to protect her from then on out, and to stand oleh her through anything…because when cinta takes over, that’s what happens.

A/N: Well, I should probably be updating one of my other fics, instead of menulis a new one, LOL, but I couldn’t help it; this idea came to me when I was taking a mandi, shower earlier, after watching a whole bunch of amazingly epic CB [music] video (on YouTube), and membaca a lot of incredible CB fanfics.

So anyways, I hope anda like it! And as for my other fics, I promise I’ll update those later on this week, hehe.

He pressed her forcefully against the wall. No matter how hard she tried to push him off of her, she couldn’t; he was too strong. “Get off of me!”

He didn’t listen to her, and continued.

“Help!” she screamed as loud as she could, praying someone – anyone – would hear her.

Luke grinned. “Can’t anda see, bitch? No one can hear you. You’re all mine.” He roughly slid a hand over her panties. “You’re all mine,” he berkata once more.

That was all she remembered before everything became black.

She downed another shot. She’d lost Nate, her queen B status, Chuck, her ‘friends’…everything.

“What’s a pretty girl like anda doing here, all alone at the bar?” a voice asked from behind her.

Blair simply answered, “Drinking. That’s what the ‘pretty girl all alone at the bar’ is doing.”

The man smirked at her. “Can a gentleman buy this pretty girl a drink?”

She stared at him and chuckled. “Gentleman? I highly doubt that.”

“Fine; can a guy buy this pretty lady a drink?” he corrected himself.

Blair turned to look at him again. “I think this pretty lady would cinta that.”

He smirked, and took out a his wallet.

Blair opened her eyes, her body aching all over.

She tried to take a look at her surroundings, but her body wouldn’t allow it. It hurt too much to move.

Blinking a few times, and groaning in pain, Blair sat herself up in the bed. Slowly getting off the bed, she was overcome oleh dizziness and an excruciating pain. She walked over to the mirror, tears welling up in her eyes. Her face was pale, and her cheekbone almost black. Finally, she let the tears fall freely. Her arms and wrists were almost purple, her back had scratch marks all the way to the back of her neck, and hickeys were all over her collarbone.

She could still hear musik playing downstairs, which means she couldn’t have been out for long. Putting her jaket and shoes on, she rushed out of the building, and hailed a cab.

There was a soft knock at the door.

Chuck set his glass of scotch down and opened the door.

“Blair?” he asked in disbelief.

She looked up at him. “Chuck,” she berkata weakly, a sob escaping her mouth.

“Fuck, Blair. What the hell happened?!” He let her into the suite and helped her take a kursi on the sofa. It was as if the events of the past week hadn’t happened. All the anger he had felt, all the sadness…they were replaced with fear, worry, concern…and cinta – the cinta he had felt towards her before she went back running to Nate. Hell, he still loved her even after that.

“I…I was stupid…I can’t believe I trusted him,” she continued to sob.

He wrapped his arms around her and rubbed her back softly. “Shhh, tell me what happened.”

“He…he raped me,” she sobbed once more.

“Blair, we have to call the police…a hospital…”

He ran a hand through his hair. “Blair…”

“Please,” she begged him.

He sighed and nodded.

“Blair, anda don’t need to apologize. If someone needs to apologize it’s the fucking asshole who did this to you.”

She cut him off. “No, Chuck…I mean, I’m sorry for everything.” Tears threatened to escape the corners of her eyes. “I was horrible to you, and a major bitch, and…and…”

“Shhh, baby, it’s okay…and anda shouldn’t be sorry. I should; I berkata awful things to you…things I shouldn’t have said.”

Blair looked up at him and smiled, one lebih tear falling down her cheek. Chuck stared back at her, a genuine smile – of cinta – forming on his face.

They leaned towards each other, their lips meeting, tongues intertwining. Their ciuman was one of passion, and tenderness. Not of lust, atau just a ‘friends with benefits’ one, but of pure, true love.

She shook her head. “No, it’s not your fault,” she explained, rubbing her arms, and wincing once more.

“You’re not fine, Blair; anda were fucking raped! anda need to go to a hospital…or let me call a doctor atau something…Please,” he added weakly at the end.

Tears started to well in her eyes again. “Okay,” she whispered, nodding.

He took his phone out and dialed a number. “Um, good evening, sir…this is Chuck Bass…”

“Ah, Charles, good to hear from anda again,” the man on the other line greeted him.

“Yes…well, Dr. Palanskie, is it possible for anda to come over to the Palace…tonight?”

“Of course, Charles, are anda alright?”

“Yeah, I’m alright…it’s a friend of mine…she was…raped…and she doesn’t want to call the police atau go to a hospital.”

“Dear Lord,” the doctor replied, “I’m on my way, Charles. Tell your girlfriend not to pindah too much.”

He hung up before Chuck could explain that Blair wasn’t his girlfriend. Not yet, anyway.

Chuck answered the door, and let him in.

Chuck turned to look at the sofa.

Dr. Palanskie nodded and walked over to the broken girl. “Ms. Waldorf?”

Blair looked up at him.

“I brought my assistant with me…” he explained pointing towards the door, as a young woman, about in her late 20s stepped into the suite, “I’m going to need anda to go with her into the other room and undress…so that she can examine you.”

She nodded and the nurse helped her up and into the other room, closing the door behind them.

Ten menit passed, and finally, the nurse stepped out of the room.

“She’ll be fine; she just needs a lot of rest…and some pain medicine. Ms. Waldorf has a lot of bruises and scratches all over her entire body, which should heal in a few days. The lebih serious wounds I’ve treated already, but they’ll probably take longer to heal. Other then that, she’ll be a-okay in no time.”

“Thank you, Rachel.” The doctor thanked her, standing up. “Well, Charles, if there’s anything else anda need anda just give either one of us a call – no hesitation.”

Rachel and Matthew gathered their things and left the hotel.

Next: Some fluff and hapiness between C & B. Promise, hehe.
tutiegal, egocentric and 4 others like this
TmoVie_obsessed It's amazing!!!!!!!!!!!!!!!!!!!!!!! as I said before, but it still is fantastic!!! I want to know what happens!!!! so yeah in short, I loved it buddy!!!!!!!!!! keep writing and updating your fics! -goodness there were a lot of exclamation points there. =D
edwestwick awww love it! poor blair, but I adore sweet and caring chuck :D can't wait for more, xoxo
lozxtitchx Can't wait for the fluff, I adore and love caring and sweet Chuck, this should be a real storyline in the show :D:D:D
tutiegal i spent all last night reading loads of your stories, they are all sooo good, I'm desperate for you to continue them :D:D
gossip-girl999 I just love how every time you have an idea you just get writing!! =)) Which is awesome because it's more for us!! =)) You've got a lot on the go now right!!?! =) But anyway I hope you update this one! Poor Blair baby!! But I can not get enough of caring Chuckles! <3333 & I totally agree with lozxtitchz- This should so be a storyline!! =))) I wanna know what happens next!! =))) LOVED IT!! xoxoxo
8
Memories To Be Forgotten...(A CB FanFic) Ch. 3
posted by kialove978
Alright I was really bored so I decided to write a chapter 3... whoo...okay so like always here goes nothing...
~~~~~~~~~~
"Chuck? Really?" Serena asked. "Thanks for sounding so surprised S!" Blair snapped. "No,no,no,no i didnt mean it like that! Just its...Chuck." Serena berkata in an apologetic tone. "Yeah. Just the thing is, Nate and I are kind of together. Well I dont know he asked me out and-" Serena cut Blair off. "You and Nate are going out?!" Serena berkata sounding disappointed. "Well I dont know. Its complicated." Blair said. "Why?" she finished. "NO reason. SO anyways, continue please!"...
continue reading...
12
queen Bee For A Reason-Ch.2: Unexpected
posted by ChuckBlairLuvA
Ch.2—Unexpected

Blair pulled him down oleh the edge of his collar. “Let me make one thing clear, we are not friends, we are not anything, anda are just helping me to rise to queen again because anda pulled me down to begin with.”

His smirk spread slighly across his face. “But anda l—”

“No,” she put a hand over his mouth, “don’t even think it. It was a mistake for me to even open my mouth on that subject.”

Chuck’s eyebrows furrowed, but he nodded and then quickly recovered his vulnerability with his trademark grin. She rolled her eyes and walked away, stopping when he didn’t...
continue reading...

Penn out and about in NYC
added by FashionVictim 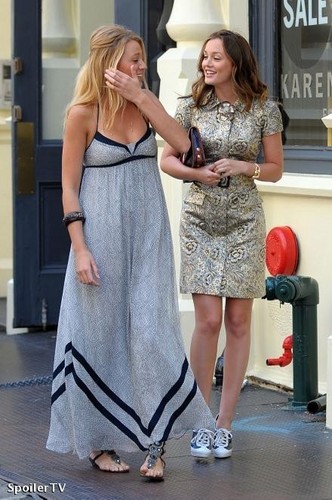 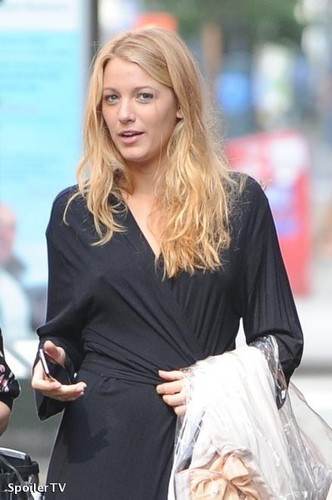 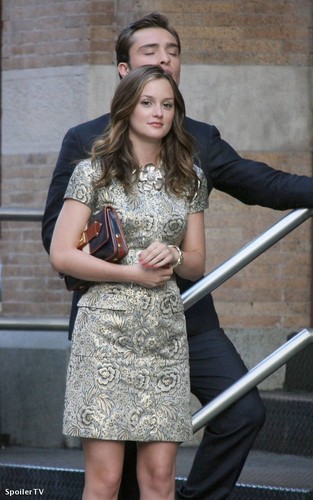 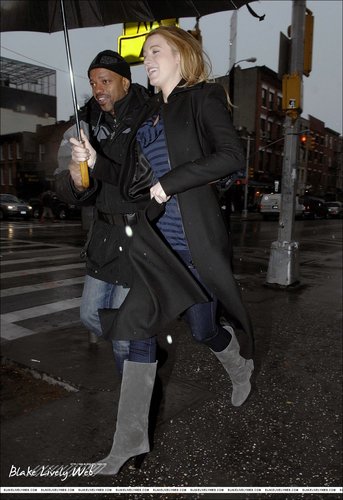 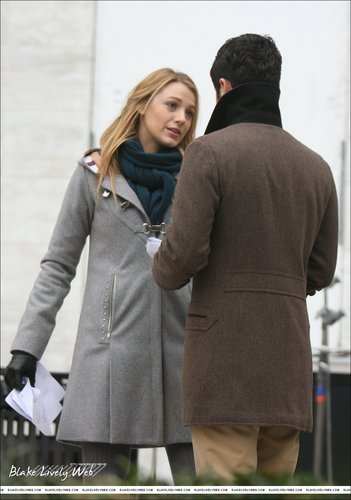 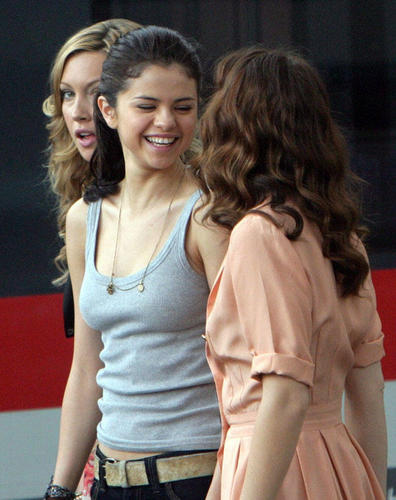