Writing is a medium of human communication that represents language and emotion with signs and symbols. In most languages, writing is a complement to speech or spoken language. Writing is not a language, but a tool developed by human society. Within a language system, writing relies on many of the same structures as speech, such as vocabulary, grammar, and semantics, with the added dependency of a system of signs or symbols. The result of writing is called text, and the recipient of text is called a reader. Motivations for writing include publication, storytelling, correspondence and diary. Writing has been instrumental in keeping history, maintaining culture, dissemination of knowledge through the media and the formation of legal systems.

As human societies emerged, the development of writing was driven by pragmatic exigencies such as exchanging information, maintaining financial accounts, codifying laws and recording history. Around the 4th millennium BCE, the complexity of trade and administration in Mesopotamia outgrew human memory, and writing became a more dependable method of recording and presenting transactions in a permanent form. In both ancient Egypt and Mesoamerica, writing may have evolved through calendric and a political necessity for recording historical and environmental events.

H.G. Wells argued that writing has the ability to "put agreements, laws, commandments on record. It made the growth of states larger than the old city states possible. It made a continuous historical consciousness possible. The command of the priest or king and his seal could go far beyond his sight and voice and could survive his death". 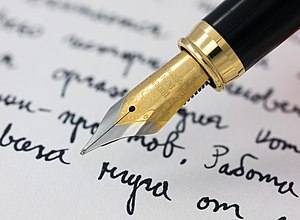 Alphabetic writing is a frequent category in human communication.

The major writing systems—methods of inscription—broadly fall into five categories: logographic, syllabic, alphabetic, featural, and ideographic (symbols for ideas). A sixth category, pictographic, is insufficient to represent language on its own, but often forms the core of logographies.

A logogram is a written character which represents a word or morpheme. A vast number of logograms are needed to write Chinese characters, cuneiform, and Mayan, where a glyph may stand for a morpheme, a syllable, or both—("logoconsonantal" in the case of hieroglyphs). Many logograms have an ideographic component (Chinese "radicals", hieroglyphic "determiners"). For example, in Mayan, the glyph for "fin", pronounced "ka'", was also used to represent the syllable "ka" whenever the pronunciation of a logogram needed to be indicated, or when there was no logogram. In Chinese, about 90% of characters are compounds of a semantic (meaning) element called a radical with an existing character to indicate the pronunciation, called a phonetic. However, such phonetic elements complement the logographic elements, rather than vice versa.

The main logographic system in use today is Chinese characters, used with some modification for the various languages or dialects of China, Japan, and sometimes in Korean despite the fact that in South and North Korea, the phonetic Hangul system is mainly used.