Greed is Scrooge's common trait.His life is hard, the reason why the memories are wonderful is because he face through it and earn it and it led him to who becomes, if his life is so hard, how can his memories be so wonderful.


It's because he reached the end of the tunnel. If anda read Don Rosa’s comics, Scrooge had to face through a very hard time and when it is over, when victory was in his hands, he got that money.

The first dime is a great example, in every single version of scrooge, he has the first dime. If that memory is bad, why does he keep it? anda got your answer.

In the three examples anda gave, they were all debunked. First of all, in Treasure Under Glass written in 1991, Scrooge did not hit Donald because he was greedy and Donald asked him for a raise. It was because Scrooge saw a picture of Donald was sticking his tongue at him behind his back.

Donald asked Scrooge for a raise right AFTER the adventure but he did not agree to it, he just berkata that he deserved something extra and then beat him up. Plus it was not confirmed if he did and one of the triplets even protested to Donald not to ask for the raise and it was Donald's idea which made them lose the treasure.


Plus he did not get the island in the end which was very funny and made it into an excellent story where the island goes to the people who deserve it. Also when Donald asked for his extra hari of wage, it wasn't because he was working extra, it was because Scrooge and Donald were both in a plane together and they flew to another country with a 24-hour time difference. That is not the same thing as working for 24 hours.

That is a common trait of scrooge as well, hell, it was Carl Barks Scrooge that is the most greedy and we still cinta him. anda can’t use it as a reason why anda hate Don Rosa’s Scrooge, every single Scrooge is a hoarder. I mean really, Goldie’s hair to the first dime, all of it has its own story and we saw it.

Also living cheap doesn’t make him a hoarder, its two different things. Scrooge is known to keep coins, all of the Scrooges, even the reboot Scrooge is insanely cheap even to use the same teh bag and go to a museum just for free food (Case files of Agent 22 and The Golden Lagoon of White Agony Plains) and he is the least cheap of all the Scrooges.

Scrooge is no coward even when he is old. I mean anda read all he did. anda probably cannot have the guts to do one thing he does that is insanely scary like what he faced.

He did not send his nephews to ‘fight his battles’ because its because he wants to spend time of them.
In chapter 12 of The Life and Times of Scrooge McDuck, he was not afraid but he called his nephews to help him so he can fight the anjing pemburu, beagle boys. Over there. He decides to bring them on his adventures as they inspired him to follow his visions again. Its canon.

Also it is very important to note that all Scrooges, in very iteration, brought Donald and the triplets along and all Ducktales Scrooges brought in Mrs. Beakley, Duckworth and little Webby.

Since we know what Don Rosa's Scrooge can do, I do not think the examples of him being a coward atau "coward" is enough to outweigh the times he is brave especially since he is the toughest of all the Scrooges.

A major complaint anda have is that Scrooge only loved money and mistreats his nephews. It is canon that in the comic,, Scrooge confirmed to us all that he loved Goldie lebih than all of his money including his beloved number one dime.

Also it is true that Scrooge is mean but he is an anti-hero. He is suppose to be a bad good guy, that's what most of them are. During most instances where he is mean is when Donald actually deserved it and was used as comedic relief.

What makes him special is that no matter what Donald loves Scrooge so much to risk his life for him to go on wild adventures because he understood the pain he felt everyday after he lost Goldie, the way he treated Matilda (it was revealed he did not apologize to her not out of greed atau pride but because he was ashamed of himself and they did reconcile already).

The slapstick comedy can make the moment lebih emotional and heartbreaking than anda think.


For example, in the episode What Happened To Della Duck? Della was doing funny and silly attempts to get back halaman awal and when she sang the lullaby as it completely shift to something emotional that was there all along (attempting to get halaman awal for her boys) it made many of us cry. It was shown to be emotionally, forcefully tear-jerking and no comedy whatsoever, that episode would have been a boring piece of garbage and anda will see fan ranting on Della right now.


But nope, the episode we saw was amazing, heart-breaking and heart-warming at the same time. Like I said, it was Della who made us cry at the song, just like how Scrooge and Goldie made us cry for them.

Scrooge did not learn his lesson on natal in Shacktown and if anda were to lose all your money atau if any Scrooge lose all their money, you'll all do the same and your argument on how Don Rosa Scrooge was disrespectful was invalid because of focusing on negative traits, it made him a different Scrooge. If it were basically the same, it would be the same Scrooge and therefore disrespecting Carl Barks.

Also most of this part is just how Ducktales Scrooge is not disrespectful to Carl Barks and this is so far possibly the only thing I agree with you. I don't think Ducktales disrespects Carl Bark's Scrooge like most fans.

This is the only fair and valid point to dislike Don Rosa's Scrooge in my eyes so far. However, I don't agree with it. Don Rosa's Scrooge is distinct from the other scrooges because of the noticeable inappropriateness and personally I cinta it. Don Rosa berkata it himself that it was meant for kids and adults unlike, shows like Rick and Morty, SpongeBob atau the marvel comics, Stan Lee broke the comic's code!

That is something grown and old fan enjoy. He is the Scrooge McDuck for the higher age group and in fact The Life and Times Of Scrooge McDuck is the comic that made Scrooge McDuck from my favorit character of all time to my role model that I admire and respect. Someone I would die for.

But of course I would disapprove it if it were to menyeberang, salib the line.

Please tampil support to Sarah Cook for her video and giving her honest opinion. None of us would have the courage to do so in her position. Please do not hate on her, she is a brave scrooge fan who deserves major respect.

He is the most depressing among the Scrooge McDucks but that is what made Don Rosa's Scrooge relatable, realistic and stood out from the other Scrooges.

The obstacles he faced was always depressing a bit but it was always serious and funny at the right balance and the reason why the memories he had in the end was amazing was because he did what he thought he couldn't do, he has the feeling of happiness, self-fulfillment and victory.

It's like when anda do a homework, it is very depressing to do it but after anda finish it anda will feel so happy and relieved that it is finally over, that anda don't have extra work due atau detention. It's all about the end of the tunnel.

Sure his stories may be heartbreaking (Scrooge and Goldie loves each other but did not end up together) but anda cannot expect a happy ending for every story, Scrooge McDuck has interesting and special stories, not some Mighty Morphing Power Rangers formula.

That is why Don Rosa's Scrooge will forever be in my jantung and he will never leave it.
cruella and ducktalesfan like this
Scroogefan1867 It took me about two hours to write so I apologize if it is poorly written
cruella Thank you so much for this review of my video. And you do make some good points. I’ve come to realize, years later, that it wasn’t a great video; as a lot of it was just me expressing my anger towards Rosa fans who were hating on me for disliking him. While I’m still not a fan of Rosa’s Scrooge because of how harsh and depressing he is, I’ll admit now that he’s not the worst written version. Thanks again for your support.
Scroogefan1867 It's ok, its just my opinion and it is important that everyone of us should have our own opinions even if it is unpopular instead of blindly following other people. Your opinion is not wrong, there is no real right opinion. A 'right' opinion is what the majority believes, even if it is wrong. 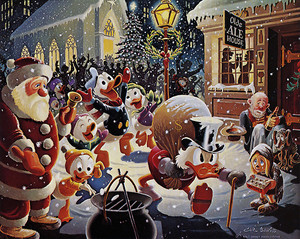 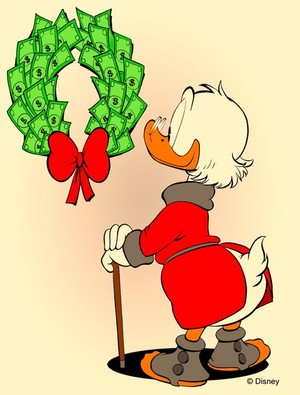 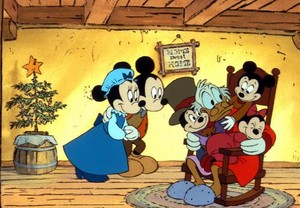 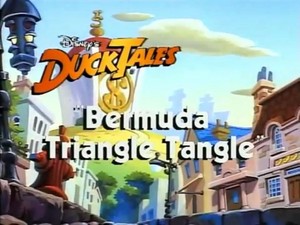 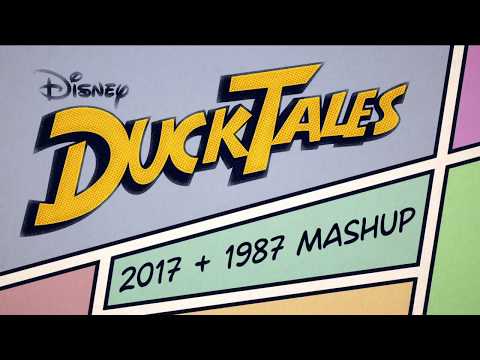 Ducktales theme song OLD AND NEW MASHUP! Credits to André Hammel
added by Scroogefan1867
For the fan of the reboot and original alike.
video 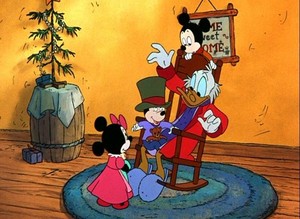 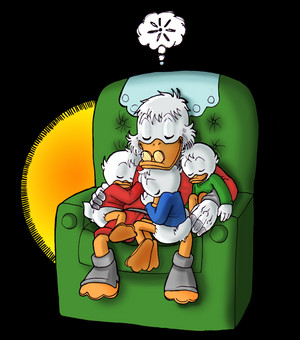 2
Scrooge & Nephews
added by cruella
Source: not mine 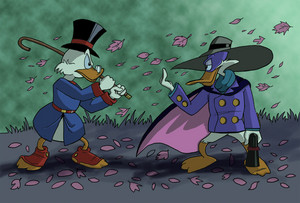 2
Scrooge McDuck vs Darkwing bebek
added by cruella
Source: not mine 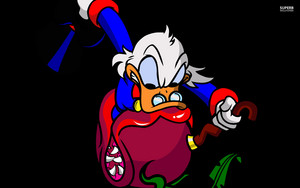 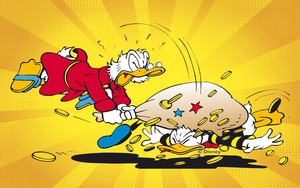 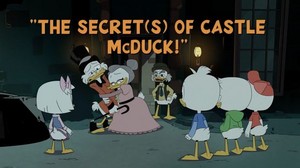 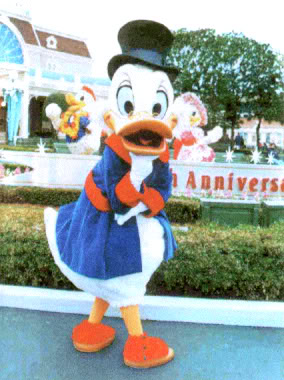