fred Weasley was buried in the afternoon. Harry and Hermione went with the Weasleys as they were considered part of the family. On the hari after, Ron, Hermione and Harry, and the remaining members of the Order of the Phoenix, came back to Hogwarts to bury one of their fellows, Professor Severus Snape. A few students were there too, as well as the faculty and staff. The three Malfoys were there too, to Harry’s surprise.

A few yards from Dumbledore’s tomb, a hole had been dig to receive Severus Snape’s body. Hermione had decided to remain with Eileen Snape, who welcomed her gladly, as she was the only person she knew a bit at Hogwarts. “I would have loved to have a daughter like you, Hermione. atau a daughter-in-law like you.” The komentar left Hermione thoughtful. Yes, Severus Snape could have been the kind of man she would have wanted for a life companion - bright, intelligent, creative, a master in his field. She had come to appreciate the older witch’s presence. She was touched oleh her motherly love.

She had accompanied her to Dumbledore’s office, where the grieving mother had been able to watch the memories left oleh her son to Harry. She felt better, assured that her son had been a good man indeed. Harry had feared she may ask him his own memories of her son’s last instants but Eileen Snape was not too much keen on seeing that. To know that her son had died quickly and not alone was enough for her.

Now they were all gathered. Severus’ body had been put in a coffin, standing nearby the grave. Kingsley was presiding over the ceremony. The Order of the Phoenix had lost many members other time. Sirius, Moody, Tonks, Remus, Fred, Severus… and surely others that Harry, Ron and Hermione did not know. Harry had a thought about his parents too and he hoped that in the selanjutnya world, beyond the Veil, Severus would see Lily again, be reunited with her, and would make peace with James Potter and Sirius Black.

The ceremony was simple yet moving. Harry berkata a few words on part of the students, while McGonagall, who had just been appointed Headmistress, talked on behalf of the staff. Then Severus’ body was laid to rest. Eileen Snape burst out in tears when her son’s coffin disappeared into the grave. Hermione had to grab her to prevent her from falling, assisted oleh Molly Weasley on the other side.

“My son ! My only son ! I want my son back ! Severus ! Severus…” Her words got drowned in her tears and sobs.

Behind, Narcissa Malfoy cried too, thinking that thanks to the man they were now burying, she had been spared that fate, burying her only son. She grabbed Draco closer to her. The young man was crying too, imagining he could have been in that grave and his mother crying over his dead body.

Everyone present went to throw a bunga in the grave on the coffin. Once this was done, the stone to cover the grave was lowered. It was a big slab of white marble, bearing the following words engraved in black :

The rest of the stone was laid bare. Horace Slughorn was the first to pindah to the stone, obviously shaken, his handkerchief in hand. Suddenly, he drew out his wand, whispered an incantation under his breath. Two words appeared under the dates, in similar black engravings :

“I taught him Potions. But I can say that the student went even farther and did even better than his master. Goodbye, Severus. anda were the best,” Horace berkata with a big lump in his voice.

Minerva McGonagall found the idea beautiful. She repeated the same incantation. Others words appeared on the marble :

“Now I understand better why he did certain things while being the Headmaster here. To protect us and the children,” she berkata with a firm voice where emotion could be heard.

Surprisingly, Neville Longbottom came forward, his wand out to carve the following words :

Protector of Students Against Evil

“He did his best to avoid us being punished oleh the Carrows. Like sending us to the Forbidden Forest with Hagrid for detentions, instead of being Cruciated oleh the Carrows. I will never forget.” Ginny, Luna and a few other students, mostly from Dumbledore’s Army, nodded in agreement. These words, uttered oleh a young man whose parents had been tortured to madness with the Cruciatus Curse, meant a lot to students and staff present alike.

Hermione had heard the incantation as her Head of House was standing beside her. She took her wand out too and words appeared on the slab :

“In remembrance of a textbook belonging to Severus Snape, the Half-Blood Prince, a book testifying his intelligence and creativity in both Potions and Spells. He was truly a Prince in his areas of expertise.”

Arthur Weasley got closer and with his wand he engraved words the same way :

Trusted Spy for the Order of the Phoenix, detik War

“Let it be known that he took considerable risks all these years to provide the Order of the Phoenix with reliable information and ensure our safety whenever and wherever he could.”

Kingsley Shacklebolt followed suit with his own wand. What he wrote left everyone around puzzled :

“The Ministry of Magic has granted Professor Severus Snape the Order of Merlin, First Class, for all the services he had rendered for the benefit of our wizarding community.” Only Harry knew about it, as both Kingsley and him had agreed to clean Snape’s deeds, especially the murder of Albus Dumbledore.

Luna Lovegood reached the stone and raised her wand too :

Devoted Servant of the Greater Good

“Because his life is the proof people can always change, no matter the mistakes they made. In the end, this is what he was indeed,” she berkata simply, with her usual aloof voice. “And this is how we should remember him.” The young Ravenclaw had surely heard about the expression ‘the Greater Good’ from her father. Hermione, Harry and Ron looked at each other. They nodded, agreeing fully on Luna’s statement. She was right. Dumbledore would have loved that one.

The Malfoys came closer too. Draco took his wand out and he made the following words to appear :

“Because he did his best to preserve my life, he had taken an Unbreakable Vow with my mother. Out of friendship for my parents, for my family. For me. The best friend is the one that is ready to forfeit his own life for his friends. I may not have learnt a lot in Potions class with him but he taught me that at least.”

“Thank you, Severus, old friend,” Lucius Malfoy said. “Thank anda for everything anda did for us,” Narcissa added, a sob in her voice.

Harry raised his wand too. Snape had shared his memories with him. Everything had been explained to him. All the misunderstandings had been lifted. However the young man wished he could have shared lebih than that with the Potions Master, so that the miscomprehensions on his side may have disappeared too. Maybe they both would have reached an understanding of some sorts, now that the truth had been fully revealed. Harry’s jantung ached at the thought that this would never happen, leaving in him a sorrowful feeling of unfinished business. I need closure, he thought. We both need closure. He raised his wand, hoping this tribute of his would help, though he was aware it may not bring that so much needed relief for them both :

The Bravest Man Ever

“He saved my life on countless occasions, as well as the lives of Hermione and Ron here, putting his own life at risk without flinching. He…” Harry did not wish to expand on the true, deep motives behind Snape’s deeds. His cinta for his mother Lily was something too much personal. “He was the bravest man I ever knew.”

At last, Eileen Snape took up her wand, in a shaking gesture. Her eyes full of tears, she whispered the incantation that carved the following words :

She could not say a word, that was impossible for her now. She just knelt down on her son’s grave, crying everything she had in silent sobs that shook her body.

The slab was now covered with words that added to each other in a daftar that honored the man now resting under it, in a silent yet moving tribute that berkata it all.
twilighter4evr, animefreakazoid and 1 other like this 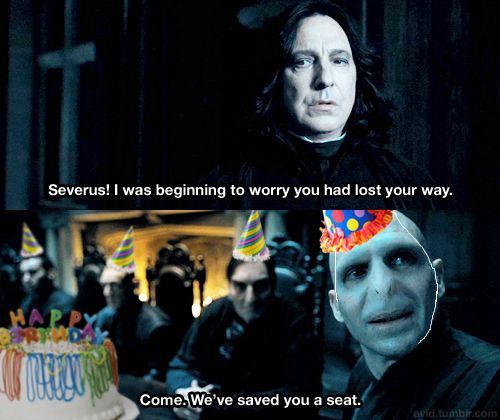 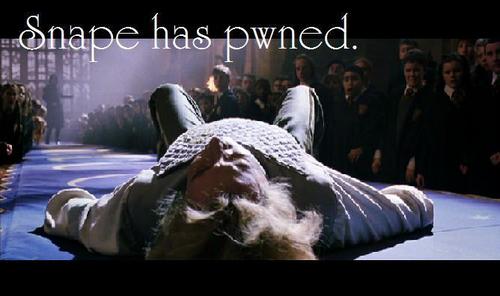 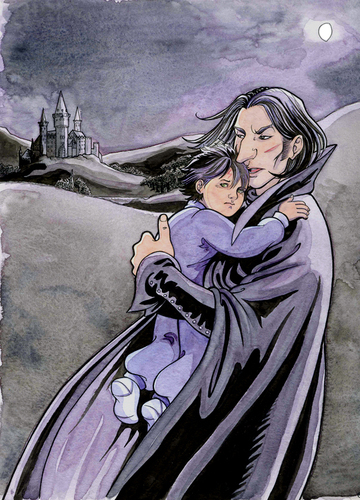 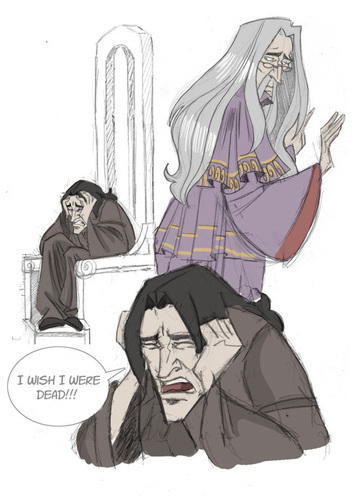 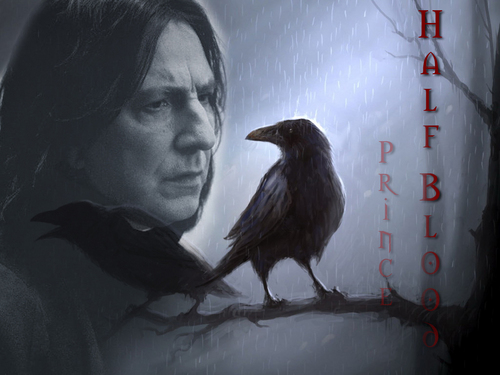 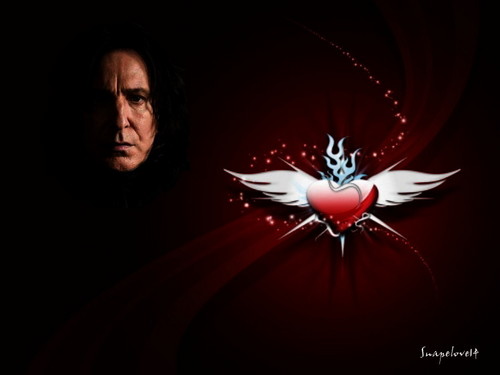 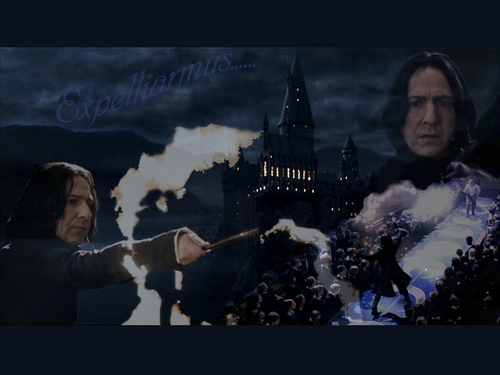 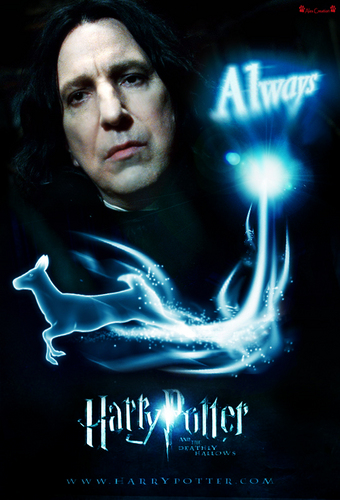 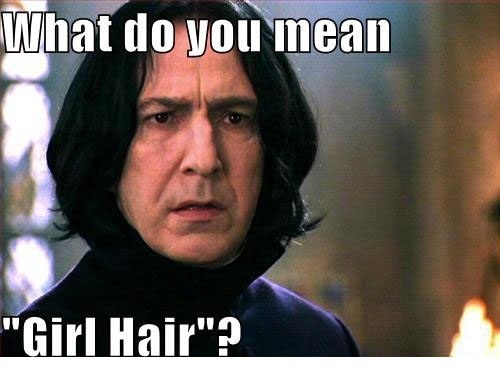 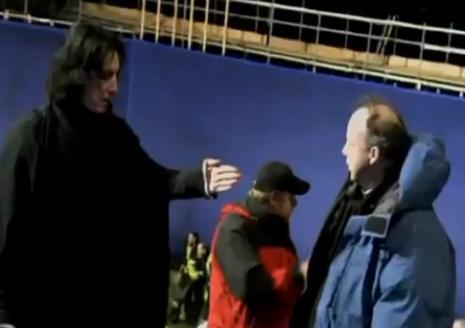 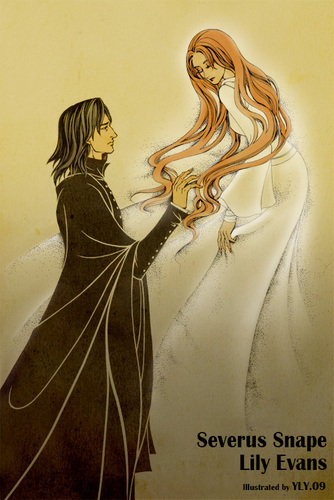 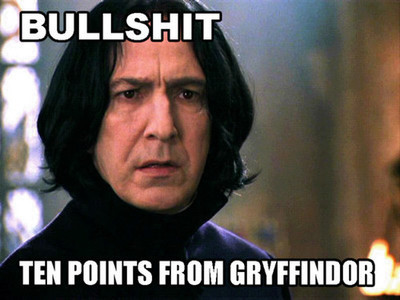 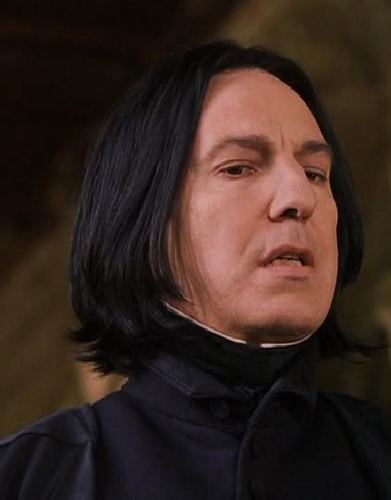 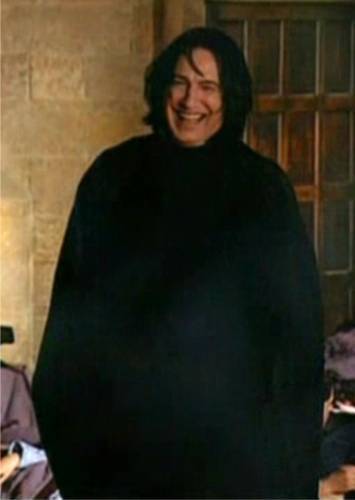 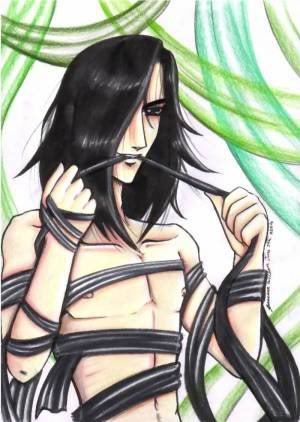 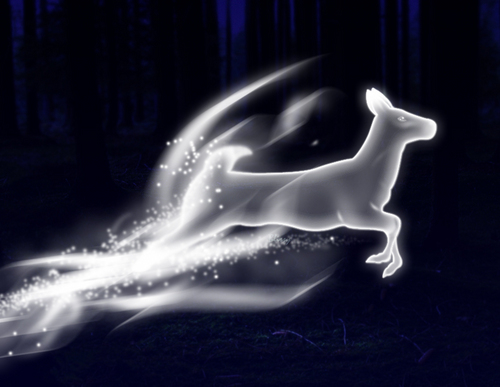