3
I can't believe this woman saying this about Rihanna.
posted by paloma97ppb 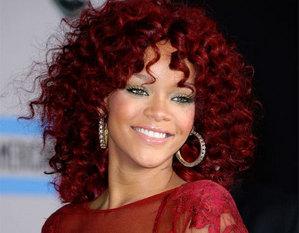 Natasha "Tajah" Burton, penulis of "low down dirty shame", assures and explained in detail in this publication have had a sexual encounter with the singer from Barbados, Rihanna.

The writer berkata they knew that a friend introduced and since that time passion emerged in them to end up in bed, where burton describes the singer gave wild oral sex and were subsequently followed frequenting is and calling oleh phone.

Louis XIII and it's all on me, nigga anda just bought a shot
Kamikaze if anda think that anda gon' knock me off the top
Shit, your wife in the backseat of my brand new foreign car
Don't act like anda forgot, I call the shots, shots, shots
Like brrap, brrap, brrap
Pay me what anda owe me, don't act like you...
continue reading...
19
rihanna - The One Lyrics
posted by LOLerz25
[Memphis Bleek Intro]
Uh, yeah. . .the boy Extra
We right back at it like we left somethin' knaw'mean?
It's the ROC, since 9-6, anda know we get busy
Got the young lady oleh the name of rihanna with me
Straight from Barbados, give 'em that flavor baby girl
Let's go

[Chorus: Rihanna]
You were there for me when I needed anda when my back was to the wall
And it's good to know that you're still the one to catch me when I fall
We've been crazy tight and I realize when all is berkata and done
Through the best of times, through the worst of times
Baby you're the one, baby you're the ooone!

Ain't nothin' wrong with it...

Oh baby, I'm not asking for the world, maybe
You can give me what I want
Baby, come hold me tight and when I'm drowning save me
Give it to me on a daily

If I'm your girl say my name boy
Let me know I'm in control
We both grown so how we feel we can let it show
I I I, won't play around
I I I, I wanna lay anda down
I I I, I need anda now, I...
continue reading...
rihanna and coldplay - "Princess of China" Lyrics.
posted by avatar_tla_fan
"Princess Of China"
(feat. Rihanna)

Once upon a time we fell apart
You're holding in your hands the two halves of my heart
Ohhhhh, ohhhhh!

[Chorus:]
I could've been a princess, you'd be a king
Could've had a...
continue reading...
"Roc Me Out" Lyrics.
posted by avatar_tla_fan
"Roc Me Out"

So give it to me like I want it
This is for your eyes only
Roc me out, back and forth
Roc me out, on the floor

Give it to me like I need it
You know how to make me feel it
Roc me out, lebih and more
Roc me out, on the floor

Come over boy, I'm so ready
You’re taking too long to get my head on the ground
And my feet in the clouds, oh oh

I'm so clean, feeling so dirty
Come right now, anda better hurry
Before anda miss out, and I finish it off, oh yeah

I’ve been a bad girl, daddy
Won't anda come get me?

So give it to me like I want it
This is for your eyes only
Roc me out, back and forth
Roc...
continue reading...
1
HOW CHEERLEADING IS SO FAR
posted by YoursMrsPrince
OK SO I DECIDED TO DO CHEERLEADING TO GET SOME OF MY SHYNESS OUT OF ME. THE GIRLS ARE REALLY COOL BUT ALOT OF THEM ACT FAST AND CURSE. NOW, I DONT LIKE BEING AROUND GIRLS LIKE THAT BUT @ THE SAME TIME I DONT WANNA BE ALONE THE WHOLE SEASON. IM REALLY SHY AND I WOULD HAVE AS MANY friends AS THE REST OF THE GIRLS BUT IM AFRAID OF REJECTION AND CRITSISIM SO IM AFRAID IF A GIRL REJECTS atau CRITIZES ME ILL BE SO EMBARRESED . BUT THE GIRLS MAKE IT LOOK SO EASY TO GO UP TO SOMEONE AND TALK TO THEM. BUT I HAVE A COUPLE OF friends NOW. THERES BEEN SO MUCH DRAMA THAT A GIRL ALREADY GOT OF THE TEAM AND WE HAVENT EVEN HAD OUR FIRST GAME YET. EVEN THOUGH THERES ALOT OF DRAMA IM NOT LETTING NONE OF anda GIRLS GET IN MY WAYOF WHAT I CAME TO PRACTICE TO DO. CHEER.

Hold on to me
Like a body rider
Heads Up
Coz tonite
Ur a fighter
Tonight
Baby we can
Get it on
Yeah...
continue reading...
18
rihanna - Cry Lyrics
posted by LOLerz25
[verse one]
I'm not the type to get my jantung broken
I'm not the type to get upset and cry
'Cause I never leave my jantung open
Never hurts me to say goodbye
Relationships don't get deep to me
Never got that whole in cinta thing
And someone can say they cinta me truly
But at the time it didn't mean a thing

[chorus]
This time was different
Felt like I was just a victim
And it cut me like a knife
When anda walked out of my life
Now I'm in this condition
And I've got all the symptoms...
continue reading...
1
"Farewell" Lyrics.
posted by avatar_tla_fan
"Farewell"

I will write to tell anda what's going on
But anda won't miss nothing but the same old song
If anda don't mind catching up
I'll spend the hari telling...
continue reading...
You Might Also Like...

[chorus]
I can't compete with a memory
How can I fight with someone that I can't see
There's two of us but it feels like three
I wish her ghost would just let us be
Boy you're everything I ever wanted
But I gotta let anda go 'cause this cinta is haunted
Haunted...

[verse two]
You say that she's gone
That you've...
continue reading...
10
rihanna Calls Out Her Fake friends
posted by nerdly00
rihanna can spot out a fake friend from a real one.And she's not afraid to speak out about people she claims try and befrind her because of her fame.Rihanna says she's had to fend off tons of fake friends since her launch of her career in 2005.she says "I have a good banteng detector so i'm good at figuring out who is real and which people want to be my friend because of what i am versus who i am.

She also has no problem speaking out about women who are too dependent on their man.You shouldn't depend on a guy to make life better atau good at all",she says.

she's one tough cookie!Maybe that's why she keeps her relationship with Chris Brown,so ambiguous.
1
A Special Young fan Meets Her Idol, Rihanna, Thanks to Kids Wish Network
posted by fan-at-KWN 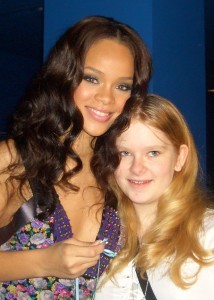 In November of 2004, Amanda was diagnosed with pulmonary hypertension. Because of this illness, she was diberikan the chance to have a wish granted from international children’s charity Kids Wish Network; she asked to meet her favorit singer, Rihanna.

In 2006, Amanda and her family were flown to New York to watch Rihanna’s rehearsal for the Dick Clark’s New Year’s Rockin’ Eve at the Nokia Theater and hang out with the superstar. Backstage, Amanda was a little nervous but she warmed up quickly to Rihanna, who spent lots of time with her young fan, chatting and smiling for the cameras.

[Verse 1:]
It goes 1 oleh 1 even 2 oleh 2
Everybody in the floor let me tampil anda how we do
Lets go dip it low, then anda bring it up slow
Wind it up 1 time, Wind it back once more

[Pre-Chorus:]
Come Run, Run, Run, Run
Everybody pindah (run!)
Lemme see anda pindah and
Rock it til' the grooves done
Shake it till the moon becomes the sun (Sun)
Everybody in the club give me a run (Run)
If anda ready to pindah say it (Yeah Yeah)
One time for your mind say...
continue reading...
17
rihanna - Bring It Back Lyrics
posted by LOLerz25
[Intro:]
Oh woah oh no
Oh woah oh no

[Verse 1:]
Mr. Dj. tell me a new play
I wanna hear my selai again
Move the crowd now
Play it crazy loud now
Bring it back now if anda can

[Hook:]
I've been waitin' so long pompa it up, put it on, tell me what anda waitin' for
Feel it deep in my soul, now it's out of control, I can't take it anymore

I been watchin anda from way across the room
won't anda come rock it out with me
You catchin' eyes like anda catchin' ties
Over here's where anda wanna be
It's so familiar, like we met somewhere before
And I'm tired of waitin baby, while anda still obey me

Let me come and I whisper in your ear, all the things anda cinta to hear
I wanna come play nice with you,
cause if I get anda alone I don't know what I might do
And I think...
continue reading...
"You Da One" Lyrics.
posted by avatar_tla_fan
"You Da One"

Baby, I cinta you, I need anda here
With me all the time
Baby we meant to be
You got me, smiling all the time

[verse 1:]
It's real late 'bout a quater to one
I'm thinkin' of everything that we've become
And I hate it, I thought we could make it
But I'm ready to dead this
Just wanna forget about it

[verse 2:]
I saw her pictures in the letters she sent
You had me thinkin' anda were out with ya friends
I'm so foolish, played me like I'm stupid
'Cause I thought it was just anda and I, oh...

[pre-chorus:]
Now I look back on the time that we spent
And I, see it in my mind playin over and...
continue reading...
17
rihanna - musik Of The Sun Lyrics
posted by LOLerz25
Listen closely
hear the musik playin
let it take anda to places far away and
relax your senses
just do what anda want anda wanna do
no need for questions, its all there for you