"Monroe obviously is inspired oleh Marilyn Monroe – who my wife is a huge fan of – and it's just a strong name for a female," Nick told Billy semak, bush and Kit alat pengisap debu, hoover on Friday's Access Hollywood Live. "When anda hear Monroe as a first name, it's kind of cool. And then Moroccan – I got to name our son. Mariah wasn't really with it at first, but I thought it was kind of cool because it kind of sounds like Mariah and Nick together.

"I proposed to my wife in...
continue reading...
Mariah's musik Box Revisited with co-writer Afanasieff
posted by alexmswann
Music Box was released on August 31, 1993 oleh Columbia Records. After selling over 15 million copies of her self-titled debut album, Mariah Carey decided to experiment with her sound for her follow up album, Emotions, but failed to make the same type of commercial impact as her debut. Carey returned to the studio determined to broaden her listening audience and produce another high quality album not only for herself, but for legions of her beloved fans. As a result, her career ascended to extraordinary heights.

This album would see Carey asserting her control over all aspects of her musical sound....
continue reading...
Mariah jawaban fan pertanyaan on Google+
posted by alexmswann
Mariah took time last night to answer some fan pertanyaan via her Google+ profile:

Lisa Davison - hows the twins and your lil family doin?

MC - The twins are great, they're so much fun. I will be talking about them in an interview soon..! Thanks for asking Lisa!

shirley lo - what's your idea of a perfect day? :)

MC - A perfect day... your location is a sunny pantai in the Bahamas perhaps atau in the Mediterranean coast, and upon waking in the afternoon, anda decide to skip breakfast and go into the ocean after your mimosa! Then anda slide down the water slide which is naturally there on your yacht!!...
continue reading...
A Letter From Mariah
posted by alexmswann 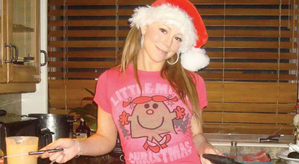 Dear #Lambily, natal Time Is In The Air Again so please sleep in heavenly peace tonight. It's so old school but I do so Miss anda Most (at natal Time).

Come on over for a Housetop Celebration, Randy will be there & possibly JD, y'all know it's Christmas! Don't forget the whole world feels a little bit lebih cinta WHEN natal COMES. oleh the way, everybody's talkin' about the good ol' days! cinta you, Merry natal and to those of anda I won't be seeing this year, Merry natal II anda too! Festive holiday smooches!!! : ) 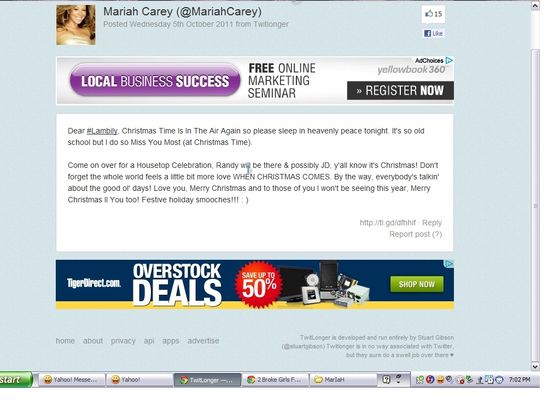 Pick Your favorit Outfit For Dem Babies!
posted by alexmswann
MariahCarey.com would like to thank everyone for all the well wishes and beautiful baby gifts we have been receiving for "dem babies".

The Carey-Cannon twins are set to make their best dressed debut in style and we know all the lambs in the land would cinta to help MC pick their first outfits!

Over the coming days, we will be sharing with anda all some of the amazing “first outfit” gifts we have received and would cinta to hear from anda what your favorit option is! Stay tuned for details to be diposting on MariahCarey.com and Mariah’s Twitter page.

All of your festive gifts & letters received to the official Mariah Carey mailing address have been passed on to the mommy and daddy to be and they are overwhelmed oleh the thoughtfulness and generosity from all the lambs! 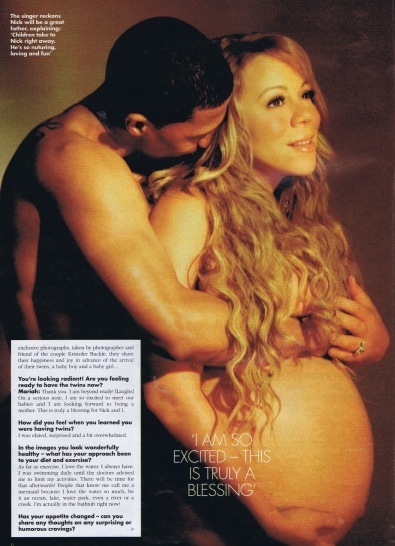 Case Closed on Mariah's 'Guinness' Controversy
posted by alexmswann
The investigation into allegations that Mariah Carey was drinking alcohol in the hospital following the baru saja birth of her twins has been closed, her rep confirmed to CNN.

"Disturbing that an anonymous caller would call child protective services but they legally have to follow up," berkata Carey's spokesperson, Cindi Berger. "What an utter waste of tax payers dollars. Yes, the case is closed."

Carey's husband Nick meriam berkata earlier that the complaint to the Los Angeles Department of Children and Family Services may have been triggered oleh a nurse's suggestion that a small amount of dark bir could...
continue reading...
Da Brat Touched oleh Mariah's Prison Visit
posted by alexmswann
Da Brat, whose real name is Shawntae Harris, has served her time and says she is a new woman. She recently spoke with CNN about her hopes for a reality show, reviving her musik career and how Mariah Carey and Nick meriam shocked her while she was incarcerated.

CNN: anda have very close family and friends, so who surprised anda oleh coming to visit anda in prison?

It was a shocker because the whole place was in an uproar. They must have called...
continue reading...
Tony Bennett Scores His First #1 Album on Billboard 200
posted by alexmswann
Tony Bennett's 85th birthday was last month, but the legendary crooner got a major belated gift this week when his album "Duets II" took the puncak, atas spot on the Billboard 200 chart.

The disc, which pairs the singer with some of music's biggest players, including Lady Gaga, Mariah Carey, Norah Jones, John Mayer, Aretha Franklin and Carrie Underwood, bowed at No. 1 after logging 179,000 copies, according to Nielsen SoundScan.

Bennett, a 14-time Grammy Award winner, made history as the oldest living artist to hit No. 1. He's also the oldest living artist to hit the Billboard Hot 100 chart after his...
continue reading...
Mariah #28 on Billboard's Biggest AC Artists Ever
posted by alexmswann
The 50 Biggest Adult Contemporary Artists Ever"
Obviously, people mock Adult Contemporary radio. It's called "vanilla" and bland. Tedious. Monotonic. Strictly for the elevator. We beg to differ: AC is absolutely captivating. And to celebrate the chart's 50th anniversary, we've ranked its 50 biggest stars.

Aside from being one of the most successful formats in the histories of recorded musik and commercial radio, our AC chart is halaman awal to hall of famers, big-betters and hard rockers. halaman awal to soulful sweethearts and songwriting superstars. AC isn't a place songs go to die. As radio folks, songwriters and fan well know - AC is the place where stars go to live forever.

28 Mariah Carey
Just 20 years old when she arrived in 1990, Carey scored three AC No. 1s from her self-titled debut album: "Vision of Love," "Love Takes Time" and "I Don't Wanna Cry." Now mother of twins, she collected her seventh and most baru saja leader with "Oh Santa!" last winter.
Mariah on HSN on July 25 and Lollipop Splash Now Available at Macy's
posted by alexmswann
Mariah is slated to appear on HSN on Monday, July 25th to showcase her latest exclusive collection of jewelry, shoes and fragrance. Mark your calendars, and get those credit cards ready!

Mariah's new Lollipop Splash The Remix fragrances: "Vision of Love," Inseparable," and "Never Forget You;" are now available at Macy's! To the right is a foto of the Lollipop Splash tester bottles/counter display in Macy's at the Northridge Fashion Center in Los Angeles, CA. Thanks to Vahe!

Get your bottles today! The fragrances are available in 1.0 fl oz bottles and retail for $35 each. 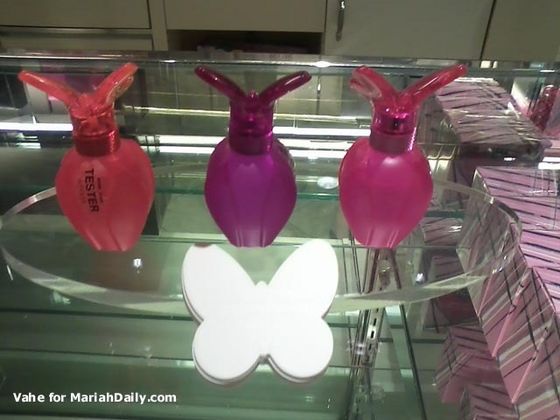 The Way anda Make Me Feel

PH: And whats it going to sound like? Are anda giving us a taste, a tease -
NC: Like I told anda on the radio, if she -
PH: anda got to listen to the radio because I get a Mariah scoop from him as much as possible.
NC: Yeah, she's very inspired by...
continue reading...
OK! Magazine: Mariah Talks bayi
posted by alexmswann

IT'LL BE GLITZ, GLAMOUR AND KEEPING THEM GROUNDED
Following the birth of her twins, Mariah Carey talks parenthood, hubby Nick and that nude photo-shoot...

Proud parents Mariah Carey and Nick meriam have finally settled in at halaman awal with their beautiful twin bayi Moroccan and Monroe after a dramatic few weeks following the birth of their first children together. The singer had to spend an extra two weeks in hospital after delivering the twins, who both weighed in at just under 6lb. So...
continue reading...
1
Mariah Carey's daughter 'a diva'
posted by alexmswann
Mariah Carey's month-old twins are already developing personalities, with her daughter displaying "diva" tendencies while her son is "chill".

The singer gave birth to Monroe and Moroccan on April 30 and even though the bayi are only a few weeks old, they are already proving to be very different from each other. Mariah's husband Nick meriam admits he was surprised to discover his children have started to tampil their individuality and has joked his daughter is going to be a "handful".

"They have personalities. And it's crazy because anda can see like my son is definitely lebih like me. He's like...
continue reading...
Nick Talks Mariah, Twins in NY Post Interview
posted by alexmswann
Mr. Mariah Carey talks twins, tato and making the wife laugh

So what if he's married to one of the most famous, five-octave-range-singing, Hello Kitty-loving superstar artists on the planet? For comedian Nick Cannon, 30, being Mariah Carey's baby daddy means keeping it real.

We got him to dish on his own day-to-day craziness.

You guys described the birthing process as an "I cinta Lucy" episode – including how anda got lost on your way to the maternity ward. What went down?
You know how we...
continue reading...
2
DEMbabies Names
posted by alexmswann
Mariah Carey and her husband Nick meriam have finally revealed the names of their twins who were born in Los Angeles on Saturday.

Their son is named Moroccan Scott Cannon. Scott is Nick’s middle name, as well as his grandmother’s maiden name.

The puncak, atas tier of Mariah’s New York City apartment is called the Moroccan Room, because of the Moroccan-inspired decor. It’s also the place where Nick proposed to his wife, overlooking Manhattan!

Their daughter’s name is Monroe Cannon. Mariah's rep says she does not have a middle name because Mariah herself does not have one. Monroe was named after...
continue reading...
Surprising OK! Cover
posted by alexmswann
With her unique talent and signature vocal abilities, Mariah Carey commanded the world's attention when she made her musical debut as a teen in the '90s. In less than a decade she emerged as one of the most populer and widely acclaimed talents in music. As a singer, songwriter and producer, Mariah Carey has been recognised with the most prestigious accolades in the industry including five Grammy Awards, eight American musik Awards, Billboard's Artist of the Decade Award and numerous World musik Awards, including the World musik Award for World's Best Selling Female Artist Of The Millennium....
continue reading...
Life & Style world exclusive: Mariah Carey poses for belly-baring foto shoot
posted by alexmswann
Mariah Carey has posed for her fair share of portraits, but none has been as personal atau emotional as these exclusive belly-baring snaps. Mere days away from welcoming her first and detik child, Mariah proudly showed off her pregnant body to Life & Style.

"I was feeling very vulnerable about taking pictures at all right now, but then I didn't want to miss this opportunity to document this once-in-a-lifetime experience," Mariah exclusively tells Life & Style. "My ultimate goal was to share this incredibly personal moment with my true fans."

And the twins -- a boy and a girl -- were clearly...
continue reading...
Mariah @ the Hospital for Her Birthday!?!?
posted by alexmswann

Mariah Carey celebrated her birthday with a trip to the hospital.
Carey, who's pregnant with twins, was hospitalized late Saturday after having contractions, but she was released the selanjutnya day.
"So #dembabies really wanted 2 celebrate w/us/share the anniversary! I started having contractions last night..went 2 the hospital," Carey Tweeted on Sunday.
Mariah Carey reveals genders of twins
In December, Carey's husband Nick meriam announced that the couple was expecting twins —a boy and a girl. Carey is due selanjutnya month.
"They almost came on 3/27- happy anniversary indeed!!!" Carey added. "We have a few lebih weeks 2 go but- wow!!!: ) #soreadyallready!" 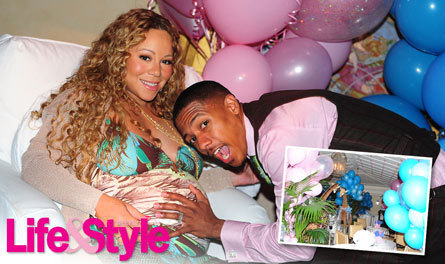