Dawn of Another hari
posted by Mallory101
"The fallen Vala Melkor shall break out of the Void and destroy the Gates of Night. He will destroy the Sun and the Moon. All the free peoples of Middle-earth shall fight against him. Many will be slain, and many battles lost. We the Valar and the Maiar shall help the people, but our role shall be minor. The fate of Middle-earth will rest upon the Light and the api of the Final Dawn."

The detik Prophecy of Námo

Dark storm clouds rolled across the crimson sky as thunder boomed in the distance. The smoke from Mount Doom added its color into the clouds while molten lava sprayed into the acrid air of Mordor. Standing resolute as ever, the dark tower of Barad-dûr rose above the bare, rocky landscape with the eye of Sauron burning ever bright on the highest point. Orcs assembled as an army around the tower, clanking of armor and ringing of swords sounding out.

The Witch-King of Angmar sighed from his viewpoint on the roof of Minas Morgul. He never liked the view of Mordor and the mountains around it. The sky was ever dark with no sign of sunlight. He longed to see the sun coming up over the mountains at dawn. He could still remember the old realm of Númenor, with its sunny blue skies, crisp green plains and the deep blue sea that surrounded it. Of course, he thought to himself angrily, Númenor is gone now, sunk beneath the waters. Just because Sauron had to entice Ar-Pharazôn to menyeberang, salib the Ban of the Valor!

Since Númenor had been destroyed, the Witch-King rebelled against Sauron the best he could under the opposition of the other Nazgûl. But after Sauron had dealt with him, he had lost the will to fight. Even though the Witch King still wanted to rebel against Sauron, he carried out his commands without question. What good it is to fight a battle anda can't win? He still remembered the time when he refused to obey any of Sauron's orders and shut himself in at Minas Morgul. Sauron had sent a legion of orcs led oleh the Mouth of Sauron and the other Eight. Excelling in sorcery, the Witch-King had made quick work of the orcs, disarmed the Mouth of Sauron and knocked him unconscious, and put the Eight under a binding spell. But all that spell-casting had left him exhausted, and he was unprepared when Sauron himself came to face him in the form of a heavily armored man with a large mace. The Witch-King had tried using sorcery again, but the ring on his finger sensed the presence of its maker and refused to work, for the Witch-King relied on it for sorcery. Flashes of lightening had filled the Morgul Vale on that day. All the spells the Witch-King threw at Sauron bounced useless off his armor. Finally he had stopped, falling to the ground on his knees in exhaustion. Then Sauron had swung his mace, and that was the last thing the Witch-King saw.

He then grimaced. Sauron had then taken him to Barad-dûr, and "as a punishment for being so disobedient and rebellious", had tortured him until he screamed in agony. The Witch-King still hadn't completely recovered from it yet and now tired easily from spell casting and fighting.

This does not make sense, He thought, confused. I am a wraith, I cannot feel, cannot sleep, cannot eat, cannot be harmed oleh ordinary weapons, and cannot get tired. Why do I seem to be getting weaker instead of stronger?

I shouldn't have accepted the ring. I thought it would benefit my country and expand my powers of sorcery. Yes, it did that. But for what price? I was turned into a wraith; I can no longer see the faces of living men. He even took away my name! I don't know my true name anymore. "The Witch-King of Angmar" is hardly a name I would call myself. I would give everything I own and have in order to become a man again. But it is too late.

A blast of hot wind blew from the direction of Mount Doom in another one of its frequent eruptions. The Witch-King jumped down into a balcony and strode back into the tower to his study, his metal boots clanking and black jubah swirling in the eerie green hallways. No one else was in the tower, for Sauron had ordered the Witch-King to be isolated. But it suited him fine, he disliked talking and quarreling with his detik in command Khamûl. Why he had made Khamûl his detik in command anyway? The twins Herumor and Fuinur were the most bothersome. Eärnur never talked atau interacted with anyone. Gothmog enjoyed killing and challenging the others to a duel. Morgomir spent too much time trying to please Sauron. And the rest were just unbearable. The Witch-King had once made up his mind to find out how did they ever become kings in the first place.

He reached his study and opened the double doors. Inside was a large room with a high ceiling. Bookshelves full of buku lined the four walls and a heavy wooden meja tulis, meja was placed in the middle. A high stand made of dark metal stood in a corner with a glass ball swirling with mysterious warna on top.

The Witch-King scowled. He also did not get why everything in Minas Morgul was eerie green, why he had to take over this tower, why he had to destroy the kingdoms of Arthedain, Cardolan, and Rhudaur, why he had to serve Sauron, why he had challenged Eärnur to a duel that ended his life as a man and most importantly, why that elf Glorfindel had made that prophecy about him.

"Far off yet is his doom, and not oleh the hand of man will he fall."

So what, the Witch-King thought, striding over to his meja tulis, meja and sitting down, there many other races other than man. I do not delight to think of this topic. Hmm… it's been a few hundred years since he spoke that prophecy. That will quite long according to the years of man. My time is near then. Perhaps this is my hour.

The glass ball on the metal stand suddenly glowed fiery red. Again the Witch-King sighed and walked over to it.

Witch-King, my Ring has been found. The voice of Sauron resounded in his head.

So? The Witch-King was not particularly happy about been interrupted from his thoughts. Nor he did not care much about Sauron's Ring. In his opinion Sauron was foolish to have placed most of his powers into a piece of jewelry.

Do not be insolent, wraith! anda shalt ride out with the others and cari for it! Khamûl caught a creature oleh the name of Gollum and he has revealed the location. cari for the country named the Shire, and find the man named Baggins. Sauron hissed angrily.

I am on my way. The Witch-King berkata grimly and severed the connection. But he did not leave the study; instead he sat down at his meja tulis, meja and from one of the drawers drew out a very thick leather-bound book.

This is the history of the Middle-earth, The Witch-King thought, taking out a quill pen and a bottle of ink. I record all that I know. This is the only comfort I find being as a servant of Sauron.

And on a page selanjutnya to a carefully drawn map of Middle-earth, the Witch-King wrote down these words,

"Third Age 2998, The One Ring of Sauron has been found. Rumors that it is in the land called the Shire, in the hands of one whose family name is Baggins. Sent oleh Sauron, the nine Nazgûl ride abroad from Minas Morgul."

Finishing the short paragraph, the Witch-King put his menulis tools and the book back again. Sauron must not see these books. The consequences would be severe if he discovers them.

Finally he walked out of the study, locking the doors behind him and sealing them with a spell. Then he went to the armory to prepare for the long journey. After a few minutes, the Witch-King was ready and led his horse out of Minas Morgul. The other Eight were waiting with their kuda in distance from the front gate, with Khamûl at the very front.

"Nice of anda to gabung us, Captain. We missed anda back at Barad-dûr." Khamûl drawled.

The Witch-King fingered the handle of his hand-and-a-half sword in annoyance. Khamûl had always tried to humiliate him in front of the others. A fool would have known that he was trying to take over his position as the Lord of the Nazgûl.

"We must make hast to cari for the Ring!" Morgomir reminded.

"As if," Khamûl laughed, "Maybe the Captain will tampil mercy on his enemies again. He is certainly not fit for the judul of 'Terror of Middle-earth'"

"I have had enough of your mindless mutterings!" the Witch-King roared, finally losing his calm and drawing his sword. Morgomir and Gothmog too drew their weapons and stood at Khamûl's side.

"So, anda had finally decided to fight me." Khamûl berkata slowly, drawing his sword, "I thought avoiding battles was your greatest priority."

The Witch King hesitated. The quarrel used to be between him and Khamûl, and now most of the others got dragged in. The whole situation could evolve into a big fight and Sauron won't be happy about that.

Khamûl suddenly struck without warning at the Witch King. Herumor and Fuinur cried out in dismay while the Witch King flung up his sword to block the strike. But somebody got in front of him first. Khamûl's sword struck with a loud clang against something. Everything and everyone became unexpectedly silent. The Witch King shook his head clear his vision and saw who blocked the strike.

Eärnur, the former king of Gondor whom the Witch King had turned into a wraith was holding back Khamûl's sword with his own.

"What…" The Witch King began.

"I didn't expect an argument before we started on our journey," Eärnur berkata quietly. "I expected better of you, Captain. Don't disappoint us."

This was one of the few times the Witch King had actually heard Eärnur speak, and the words he spoke surprised him greatly. Nobody, except Khamûl, dared to speak in such a manner to him. It unnerved the Witch King. Had he become so weak that any of the Eight could challenge his authority? He placed his sword back into its sheath.

"Enough of this madness. Let's go." The Witch King berkata shortly and mounted on his horse. The others followed and rode fast in the direction of the West.

Why does Khamûl have to cause trouble every time? The Witch King thought as he rode, I wish Sauron never created the Ring. He lost it; he should find it, not us. But why did Eärnur block Khamûl's strike? I was lucky that he wasn't planning to murder me for what I had done to him. There are so many things I don't understand. Why do I also have a feeling that this quest would be a failure?

3
aragorn and arwen
added by lotr 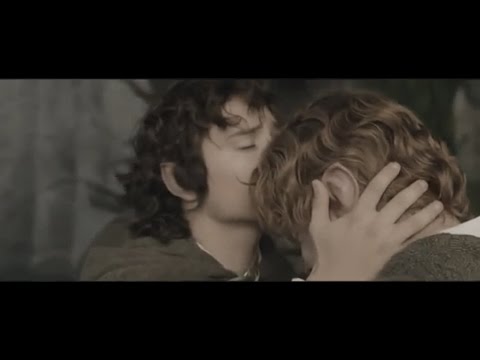 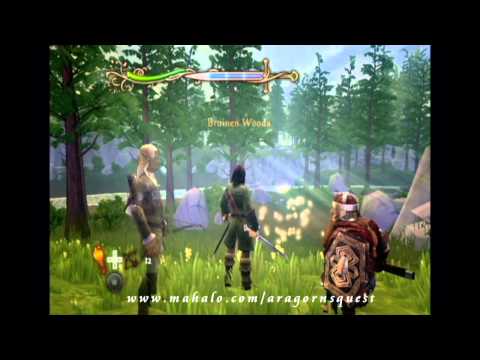 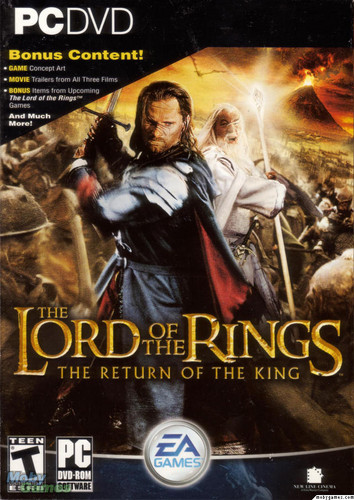 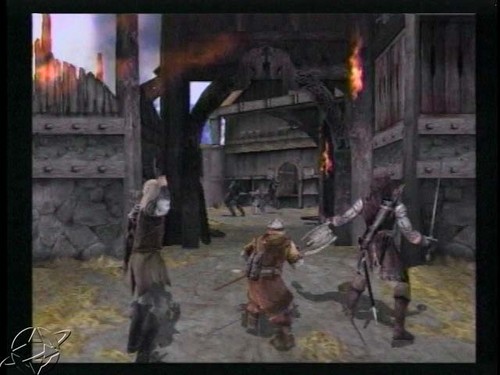 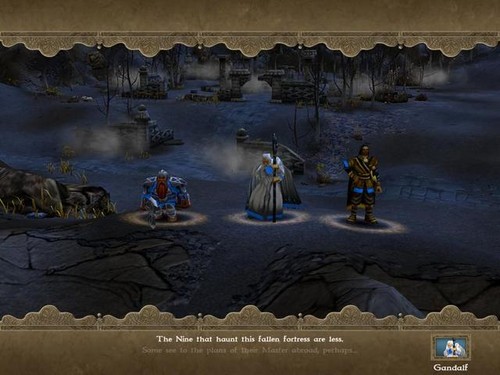 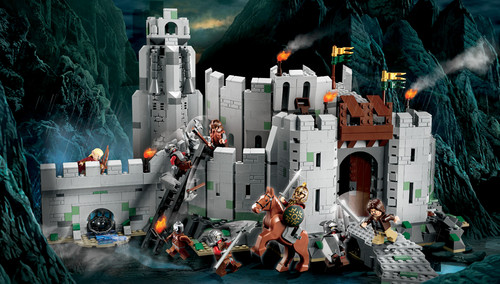 1
The Return of the King: The Muster of Rohan
added by i_luv_angst

1
The Return of the King: The Beacons of War
added by i_luv_angst

1
The Two Towers: The Black Gate is Closed
added by i_luv_angst

10
The Fellowship of the Ring
added by ShadowFlame
Source: http://www.tk421.net/lotr/film/fotr/01.html

8
Fellowship of the Ring
added by ShadowFlame
Source: http://www.tk421.net/lotr/film/fotr/01.html