1
Shot Because Of Reason
posted by Hellowittykitty 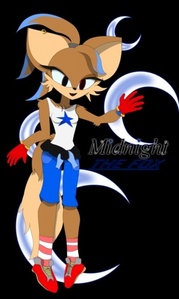 I liked this story personally, to be honest. Plz check out my others!😁
Alucard ran down the hallway quickly, worried about something that had recently occurred. He was minding his own business in his chamber until a loud siren sounded across the hall. Alucard figured it was the Valentine Brothers invading and Yan asking for another pack of shifty cigarets, but that didn't seem to be the case. Integra was yelling and screaming, for the first time in her life. She hadn't screamed that loud since her mother's brutally purpose murder. Alucard quickened his pace at the awful shrieking, with Walter stuck like hula at his side. Walter was quiet, and he used his light blue wires to ayunan from side to side every menit now and then. Alucard's red eyes widened as he saw the only door between him and Integra was chained up with a large metallic chain. "FUCK!" Alucard yelled loudly as he banged his head against the Victorian Styled wall. Walter shook his head in dismay and felt around the chains. "Alucard, they are too thick to cut with my wire. Unfortunately, we must smash the door in a million pieces, completely blowing our cover." Alucard shot Walter a very dirty look and smashed the door with his guns. Walter smiled as he entered Integra's office, and he saw a Nazi soldier shimmy closer and closer to her, and Integra yelled. Her trusty silver gun with her name engraved within has lost all of its ammo. Alucard readied his Jackal gun and shot the vampire Nazi right in the shoulder. Walter used his blue flashing wires to tie the Nazi together and squeeze his limbs apart. He yelled some acak words in German, and Integra quit her screaming. She walked nonchalantly over to Alucard, who was smiling that the fact he finally killed a Nazi. Besides his own father. "Okay. Tell us everything anda know shit-for-brains atau I'll have Alucard here shoot your balls faster than a ceri, cherry spitter."

The Nazi soldier announced that his name was Maze, and people called him that because he was as cunning as a whip. Maze told the three everything he knew, from where the Major was located to the area where all their supplies were. Integra thought that this guy spilling the truth would mean very bad juju for the Nazis and Major, but Alucard subsided. He figured that with the wicked retort that Maze would think twice before lying to a badass like him. Integra rolled her eyes, then polished her exquisite glasses. Walter kept awfully quiet, only watching from the sidelines. "Alright, that iz all I know." Maze berkata with a annoyed grunt. Alucard laughed manically at Maze's response, clearly stating that he knew he knew more. He placed his famous gun right at Maze's cranium, ready to shoot anytime. "Tell me whatcha know, atau I'll enjoy having a giant feast on your blood." Maze shivered and started whimpering like a stranded puppy. He spilled lebih of the beans until Integra was satisfied with the information. "He is telling the truth. I bet the Major will kill anda when he figures out anda spilled puncak, atas secret information to his number one enemy." Walter chuckled lightly in the background, only a shimmer of his glasses visible. "Shall we go, Ms. Integra? Alucard?" They nodded and left Maze there. They completely forgot to kill him! "Major, their right where anda want them. Contact the Escariot organization immediately."

Maxwell was sitting in his private jet and initiated his plan in his mind. Kill Alucard, get the money from the Major. Somehow this plan felt sickening and that this was definitely the wrong with this. But he desperately needed the money for himself and the Vatican. Maxwell shuddered at thus thought but picked up the phone anyways. He failed to contact Alexander Anderson, because he was probably busily killing people that were unholy to The Lord. And the police girl, Seras, was now working for them too. Seras entered the room with her trademark meriam from Alucard. Maxwell was surprised she still kept this, she probably still had some feelings for the bloody stupid vampire. "Sir Maxwell," she started shakily, "I was wondering if I could kill Integra. Instead of that spy Walter.....he might not be trusted. He could easily device us." Maxwell sighed and tapped his fingers impatiently on his marble desk. His shadow was the only thing visible in the dim light office. "Police girl, I know that anda are jealous of Integra, but anda need to know your privilege. All we need anda for is your brawn and strength. anda are our pillar. The one to stoop those low leveled asses down to their proper place. Nothing else." Seras was hurt and her blue eyes shined with tears. She left the room without another word. The ebony wood doors shut behind her, and Maxwell grinned. His secret speaker had finally picked up some symbols of Alucard. "YES." He said. "ANDERSON!"

Anderson came through the room and carried his swords. He gave Maxwell a sickening grin, and he could tell what Anderson was thinking. "Go have fun." Maxwell sighed as he rubbed his temples irritably. "But don't let the boot go under you." Anderson nodded and slammed out of the room quickly. Alucard and Integra were walking along the other edges of Maxwell's base. Dammit, it was so fucking hard to see through the prem colored sheet rock. Walter paced briskly upward towards the security device, "It's locked. Shit." Integra pulled out a cigar and lit it on api and put it near the steel device. Alucard thought that this wasn't going to work. "You actually are going to use a fucking shitty cigarette. Like that is gonna wo--" oleh then, Integra had managed to open the lattice black door. There was a beautiful garden decorated with jeruk, orange pumpkins, sea blue blueberries, and plums. Steel soldiers with their heads up high decorated the corners of the garden. Integra seemed to like how this looked, and put a mental note in her head to do this to the Hellsing Mansion. Walter stopped in his tracks and his eyes widened. "I sense something sinister Ms. Integra. It feels holy and strong at the same time...." Just before Walter finished, Anderson jumped out of the bushes and cut Integra on the wrist.

"OUCH!" Integra howled like a serigala as she feel down on the grass. Alucard turned around quickly and shot Anderson's arm. "Ya got me, ya bloody vamp." Anderson giggled manically. The two readied for battle. They fought viciously while Integra was being healed oleh spy Walter. Alucard got pinned to the floor and Anderson positioned his wooden gun right on his chest. "Any fucking last words, Alucard?" The police girl jumped out of nowhere right when Anderson pulled the trigger. She GOT SHOT!

Her blood splattered everywhere. Alucard couldn't do anything about it. He should've took the shot, he would've eventually regenerated. But she couldn't. Seras quivered like a mouse in Alucard's arms. "I got shot because of reason Alucard. This isn't your fault. I was a evil person anyways......" Then Seras died. Shot she did, but because of reason, No.
KawwiChan likes this
KawwiChan c:>>> It's great! c:::
Hellowittykitty Thanks so much! 😄 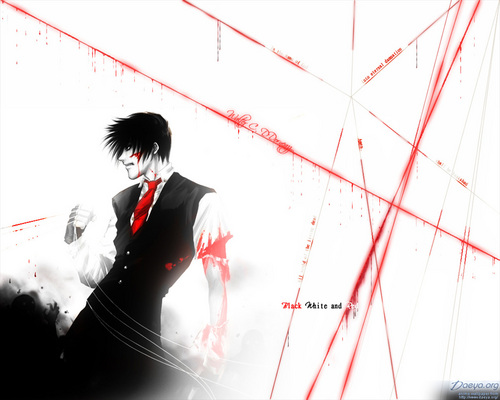 walter black white and red
added by nothing956 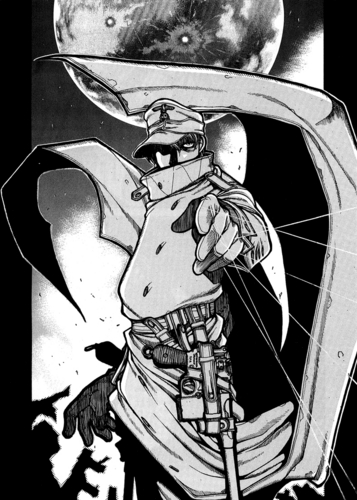 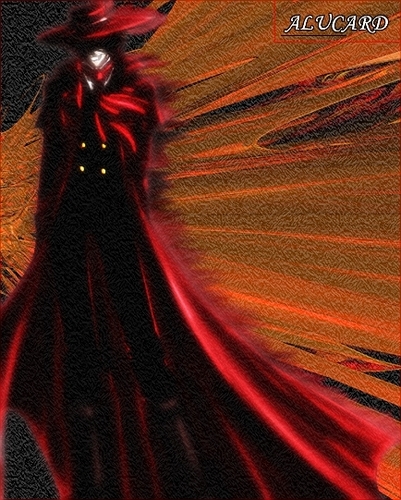 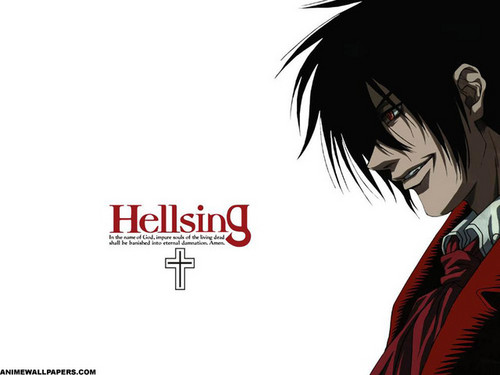 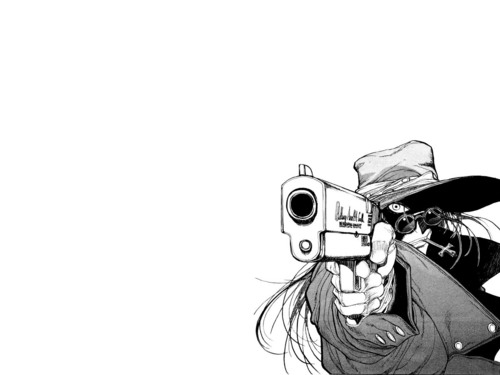 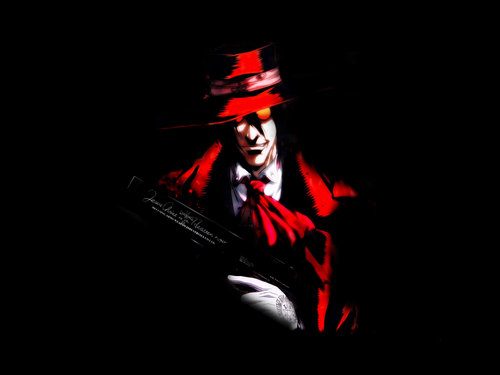 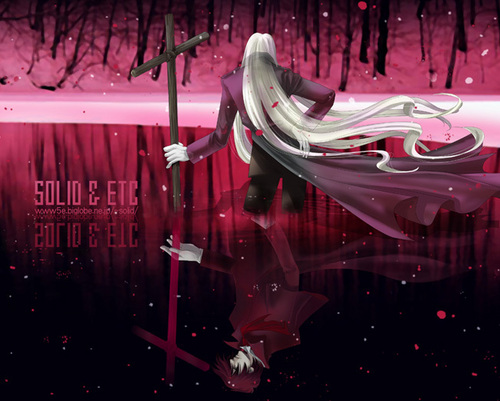 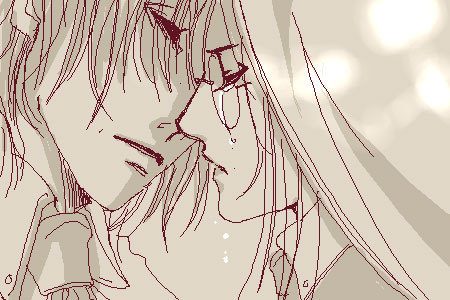 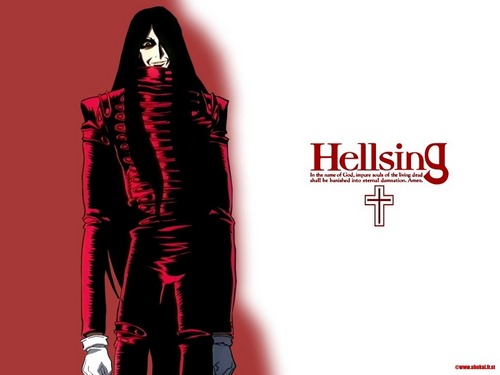 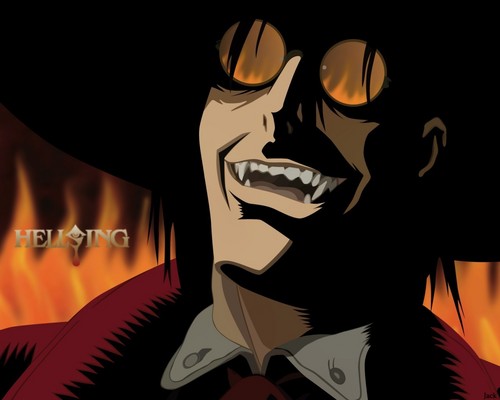 Hellsing
added by Alyna
3
Hellsing FTW
posted by Cantwait4book5
I only just started watching Hellsing and already I'm hooked. The episodes are so addictive and the story line is great.I've only watched episodes 1 to 14 but i still think it is good. I have to watch the episodes on youtube cause I live in Australia and it isn't on TV.


Also, although he may be a fiction character, Alucard is hot. Does he ever get together with the main girl character (I have forgotten her name... opps) ?


If anda are also a fan of Hellsing, become my fan, give me props, rate this article, and send me a message. 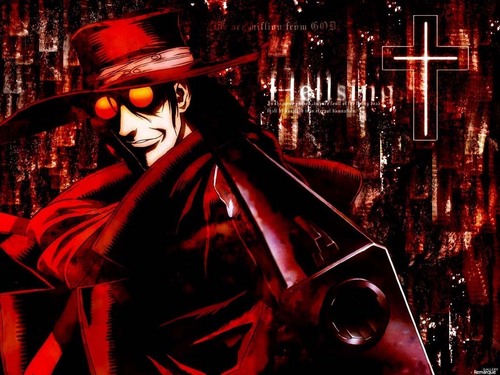 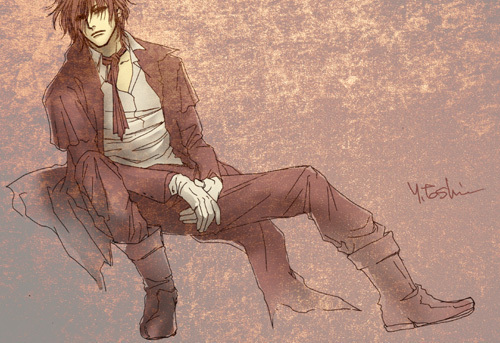 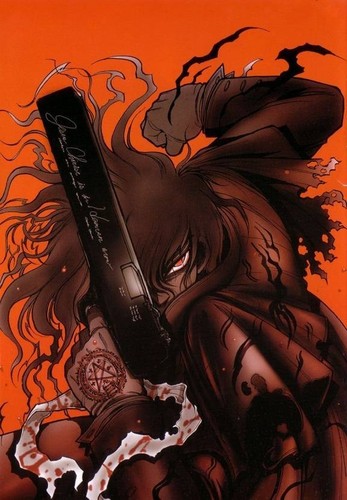 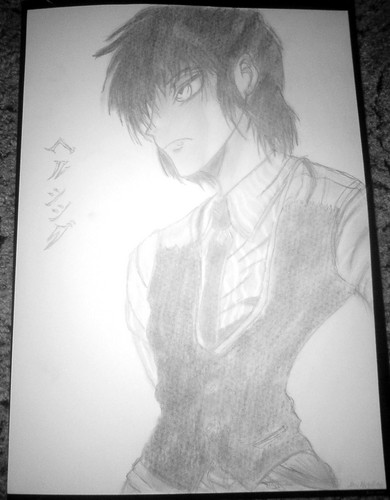 Young Walter
added by SirNat
Source: My own 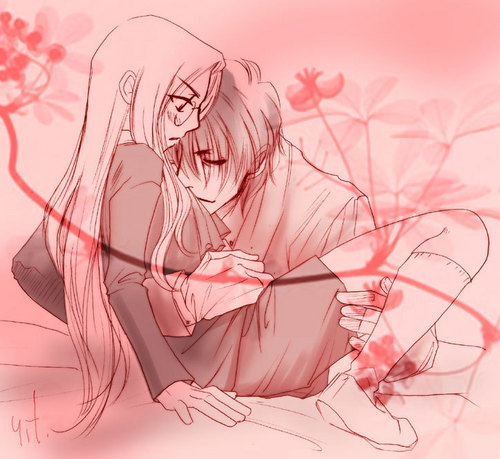 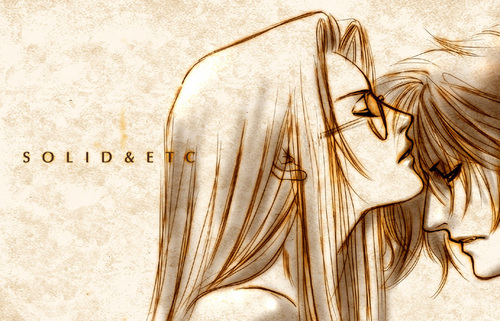