Anna Hathaway
SPOLIER ALERT!:
the girls make up, and Emma is the made of honor.

Emma ends up dancing with Liv's brother, and eventully they get married to...

For the last scene anda see Liv sitting at a table, and Emma walks in....

Liv asks for the details of Emma's honeymoon but ends up saying, "No, anda married my brother, and that's just creepy!"

They are both set to give birth on the same day!!!

I looked at Nate and Emma.They were dancing together.
Hey,I thought,Nate,that’s my best friend.
It was as if Daniel could read my mind,because he berkata at that moment.
“Why don’t we let them go.”
“Hmmm,”said I.”Why do I think that I married someone smarter than myself.”
And then we kissed.

I was standing near a table,watching as Liv and Daniel danced.They make such a cute couple.Better than me and Fletcher anyway.I now realized that me and Fletcher weren’t............well,we weren’t meant together,like Liv and Daniel.
Just then,Nate came over me and asked....
continue reading...
2
Fashion File:Bride Wars
posted by Ilovemovies13
Although Bride Wars was not a commercial hit,I still appreciate a down to earth story with a mix of simple and chic fashion.Which is why I am making a Bride Wars fashion guide.
Liv(played oleh Kate Hudson)is a high-powered layer shows her impeccable style and classic designer wardrobe.Here are her puncak, atas five style chioces.
1.Anything Black
2.Trench Coat
3.Soid colors
4.Anything fitted
5.Neutral Makeup
Emma(played oleh Anne Hathaway)is her complete opposite.As a middle school teacher,she has a lebih realistic budget which is why anda see wearing some of the same things throughout the movie.Her puncak, atas five include:
1.Color
2.Patterns
3.Fun accessories
4.Vintage-inspired
5.Reusing your clothes
Hopefully oleh using this guide,you be able to have Bride Wars inspired style. 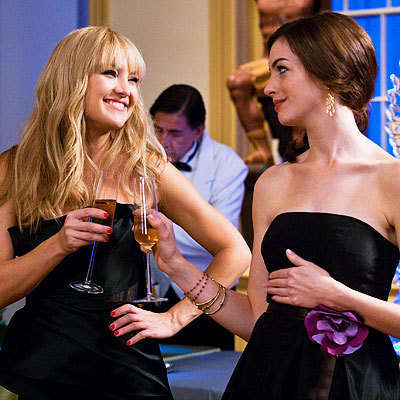