3
5.19 Review:“It Girl: Interrupted”Should Have Been Titled“Chuck: Being Awesome”
posted by laurik2007
After watching this episode, we feel like our recap will read lebih like Chuck bas, bass Appreciation Post Part 500 atau whatever, because damn. He’s just that awesome. From rocking a red onesie jumpsuit, to proving yet again that he is lebih serious about Blair’s happiness than even Blair herself, he was the shining bintang of the show. 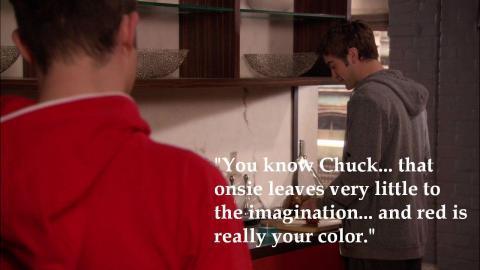 We loved Chuck in his onesie–Seriously, who else could pull that off?–and his man-bonding session with Nate at the beginning of the episode. We also loved the callback to early seasons of Chuck and Nate playing sports together–it actually felt like Gossip Girl. However, Nate is officially on notice with us right now. Telling Dan about the dowry, knowing that Chuck NEVER wanted Blair to know about it? We know you’re super busy with your blog and doing Serena’s sister and all, but Chuck is supposed to be your number one bro, bro.

It was so nice to see Serena being a friend/sister to Chuck, albeit briefly, when he needed someone and had absolutely nobody to turn to. Can we PLEASE get lebih of these lovely Chuck and Serena scenes? They are the only ones who can even guess as to what the other is going through and it would be exemplary to see them support each other when nobody else seems to give a fuck about them. We cinta their siblingy-ness. Please don’t fuck this up, GG writers. 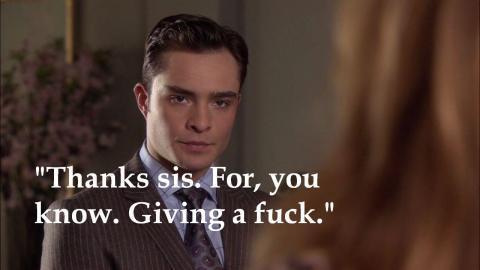 We got a Blair and Serena scene and it was…awkward…to say the least. It’s sad to see these two so try-hard and forced. Seems like the fact that they share a bathroom (yes, we will continue to mock this forever and ever) is doing lebih harm than good to these jilted friends who not so long yang lalu considered each other sisters. While we can’t blame Serena for being slightly underhanded with her new role as GG–and for harboring resentment towards B–we wish she would just be upfront about her feelings, instead of pretending like everything is fine when it so obviously isn’t. We hate to see Serena regressing. However, we get that it’s almost time for the annual Serena/Blair showdown. This one is going to be a doozy. 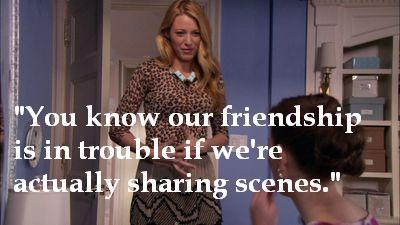 It was nice to see multiple scenes with Blair and Chuck interacting. The two detik elevator scene had lebih intensity and feeling than any and all DB scenes combined. Blair was…not at her best, atau in her own words “at rock bottom” during this episode. Admittedly, she wasn’t very kind to Chuck, despite him reaching out to her as a friend (and writers, anda can re-write history all anda want, but Chuck and Blair WERE friends LONG before they enacted the hottest limo scene in history and all the love, drama, heartbreak and sexy times that followed, AND even throughout), and the fact that he had just saved her ass. She was overtly cold to him when he first came to her for help, and progressed to downright bitchy and harsh after finding out about the dowry. The convo went something like this:

Blair: anda paid my dowry and saved my family from bankruptcy after I couldn’t resist doing Humpty Hump in a Dumpty Dump? (but not before ciuman him in your bedroom)

Chuck: I did it to help you. anda weren’t supposed to know.

Blair: Don’t lie. anda just did it because anda want a piece of thissssss.

To be fair, she was very preoccupied this episode with mourning her childhood dream of becoming a princess (surely we can all sympathize with THIS. Remember going through this, girls? No? Oh.) and she did send him a text message at the end of the episode, thanking him for “setting her free.” 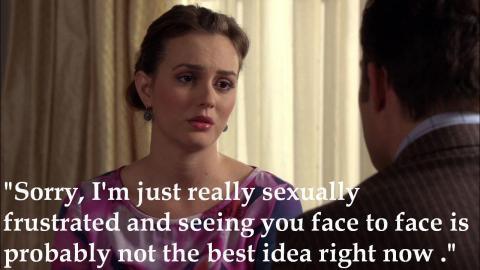 Blair honey, listen. A handful of episodes ago, anda wanted to run away with Chuck and have him raise your kid as his own. Remember? The—kid? Probably not, because Safran doesn’t feel like menulis about it. Anyway, don’t anda think it’s kind of redundant to keep chasing after Chuck to tell him how much anda think he sucks when all he is trying to do is either a) stay out of your way and b) help anda out? The best part about this scene was that Chuck FINALLY got to walk away rather than stand there with his sad eyes and take it. Glad to see they gave a bas, bass a break already; HOWEVER, we also know that this scene has some important subtext.

Yes, Chuck has proved himself over and over and over again that he is worthy of trust and that his cinta for Blair is genuine and deep, but Blair still has trust issues with Chuck–her great and consuming love, for whom she would give up everything else rather than lose him again– who hurt her badly in the past. Trusting Chuck–BEING with Chuck–is the greatest risk Blair could possibly take. This scene annoyed us only because it came a season too late. After all that has happened in the 18 episodes prior to this one, it’s difficult to understand Blair’s POV. Didn’t we already do this in 5.7 when Blair was determined to prove that Chuck hadn’t changed? He’s only gotten exponentially better; meanwhile, Blair gets weirder every episode. But we think we get it now. This scene needed to happen to close the door on the past and open another for a chance at a healthy AND consuming love. They will be “equals” when they reunite.

Furthermore, to be perfectly honest, we think a lot of Blair’s coldness and seeming hostility stems from the fact that she is still madly in cinta with him and trying desperately to deal with that. Had she seemed indifferent, we would have been worried, but there is still so much obvious passion between them, and conflicting emotions have always made Blair go a little overboard. 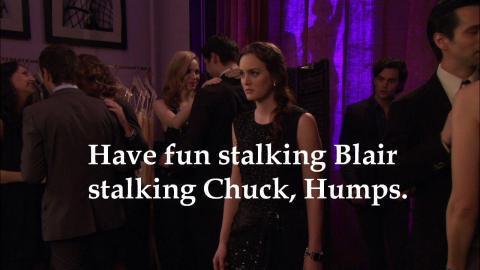 And so it begins. Be afraid, Humphrey. Be very afraid. Once Chuck and Blair start getting close again, things aren’t going to bode well for DB. We’ve already seen that Chuck makes him understandably insecure and it’s only going to get worse from here. Dan is really kind of irrelevant at this point, even as far as DB go. He’s Louis 2.0, Nate 3.0, etc. Speculation based on historical fact: Watch for Blair to begin overcompensating for her guilt in upcoming episodes as she re-enters the state of denial. Also–if Dan makes some kind of gesture that requires a commitment from Blair, we expect to see the beginning of her exit strategy.

As for the whole “who gave Chuck blood” mystery, we still think Elizabeth is Chuck’s mom (Would Safran dare to retcon a retcon? Oh probably, but anyway…) Diana’s timing for her own reappearance is suspect, and we DO think there is a link between her and Chuck’s family, but is she is mother? We don’t think so. Is she Bart bas, bass undercover? We definitely think she is assisting in KEEPING Bart bas, bass under cover. Oh Chuck. anda are the Gossip Girl world’s punching bag. Luckily, he’s in a good place right now and we think he can handle whatever fuckery is coming his way. Especially since we know Blair will be very much involved in this storyline. A King can handle anything with his queen oleh his side. 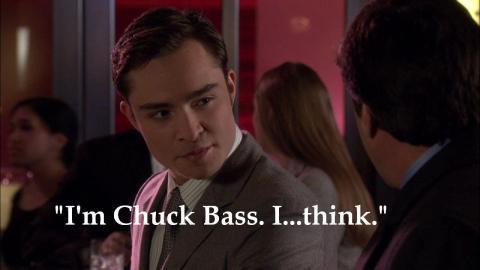 All credit goes to link
Martym, cintia_cs and 1 other like this
ratava123 You know what? That was freaking awesome. I loved that. I really like looking at Dan being like the 3rd Nate or the next Louis. Now I still won't watch these Dair crap full episodes but I am looking forward to the Chair reunion now. :)
cintia_cs The only thing missing on this review is the part where Serena was a backstabbing bitch to her own blood. But if you're nice to Chuck for 5 seconds, I suppose that automatically makes you a great character. :/
4
Why Dair would NEVER work out?
posted by bdavis98

Plz don’t attack me I’m just stating facts, and as they always say the truth hurts

As we all know from the first season until now Dan was always the OUTSIDER, LONELY BOY he even wrote a whole book about being the outsider and that’s after spending 4 & half years with the upper east sider’s circle.

No matter what he been through with them (Nate, Serena, chuck, Blair …) he still judge them and saw himself BETTER than them, still after everything he still looks down on them, want a proof Nate his best friend didn’t even have a dissent role in his book, the girl he loved since he...
continue reading...
6
Trying to understand Blair!
posted by laurik2007 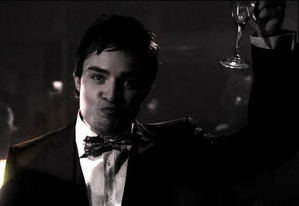 I was really pissed at Blair but then i remembered why i cinta her character and i tried to understand why she is behaving this way right now.

I think that she made so many mistakes and got hurt and now she is afraid to be with Chuck because she knows that he is the only one who can emotionally hurt her.What i mean is that when anda cinta someone anda know that anda can only be hurt from that person because is the only one who really matters to you.She is afraid to go back to Chuck because of that(like Serena told her the hari of her wedding). She goes to Dan because she knows that he can’t hurt...
continue reading...
7
My thoughts on Dair... revisited
posted by ratava123
I know my last one of these was diposting on the Gossip Girl fan page but I know there are a lot of Dair shippers there and I really don't feel like arguing with them about this. So to just save everyone some annoying fighting I'l just write here where hopefully most of anda will agree with what I have to say.
So just as a disclaimer I have not yet watched the most baru saja 2 episodes. Meaning the Valentines hari one and the one after that. But I just cant bring myself to watch the Dair show. Gossip Girl is not the same tampil it was 2 atau 3 years yang lalu and its becoming hard to watch. And yeah, I know it's...
continue reading...
3
E! Online / Ed Westwick on Chuck and Blair's Future and if He's Ready to Say Goodbye to the tampil
posted by laurik2007 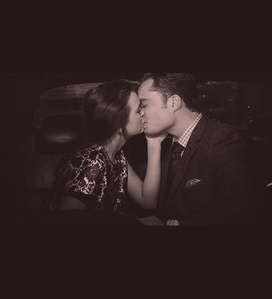 It's such a big deal for him. It's taken on a thing, like she is the air that he breathes ...
So we're hearing this Ed Westwick fellow is kind of popular.

Understatement of the century? Probably. There's no denying that Gossip Girl's Chuck bas, bass is one of TV's most iconic characters, with his outrageous outfits, snarky one-liners and ability to straddle the line between leading man and villain. There's a reason he's called the Dark Knight. Another reason he's so popular? He's one-half of one of the show's fan favorit couples Chuck and Blair, also known belovedly as "Chair."

We sat down with Westwick to talk about what's ahead for Chuck and Blair (Leighton Meester), Chuck's ability to...
continue reading... 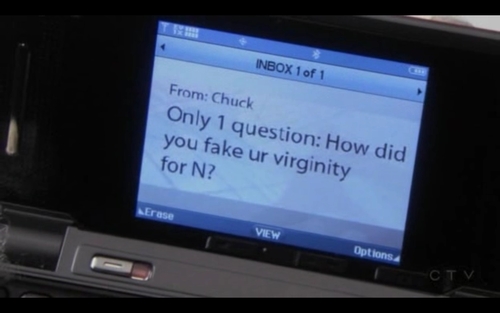 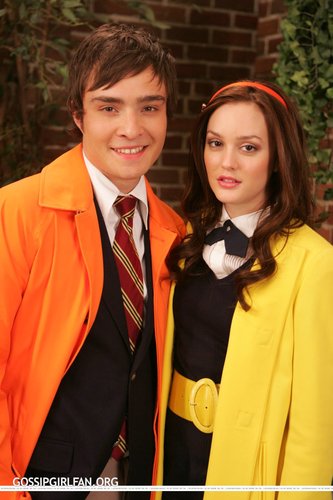 anda are all i need... you're everything C&B
added by bea93delena 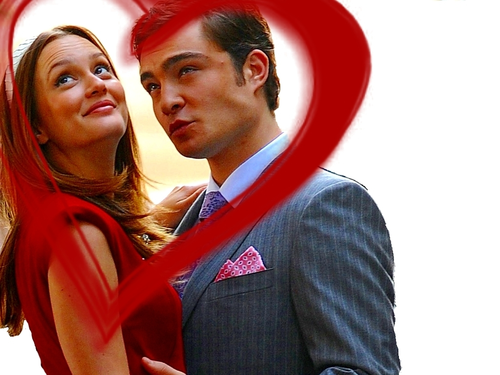 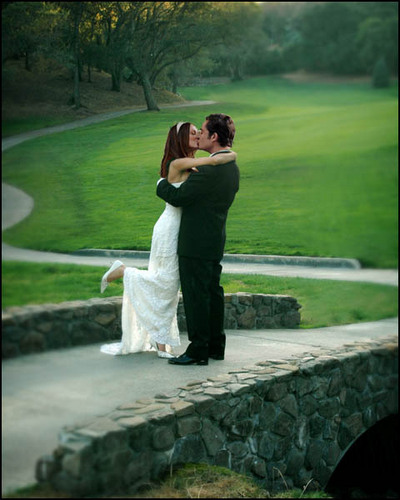 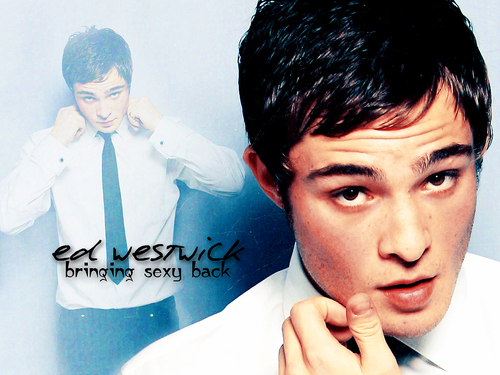 2
no words neededღ / 5x24 'The Return of the Ring'
added by laurik2007
Source: signaturescarf at tumblr 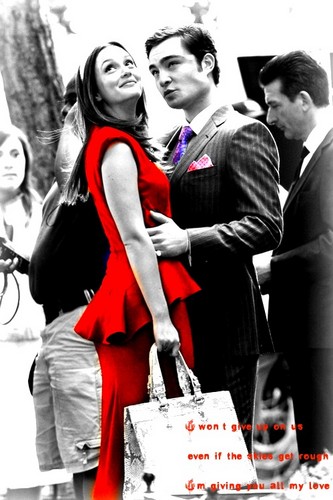 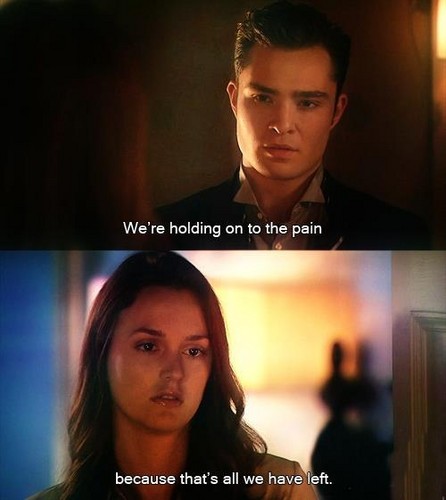 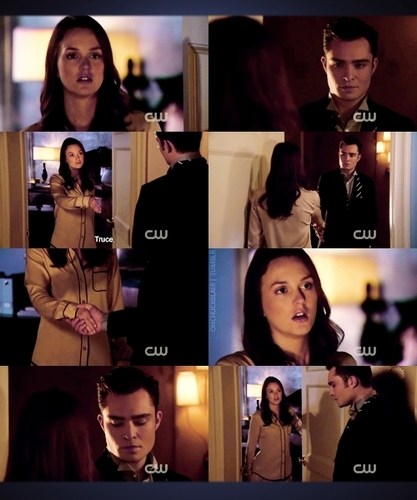 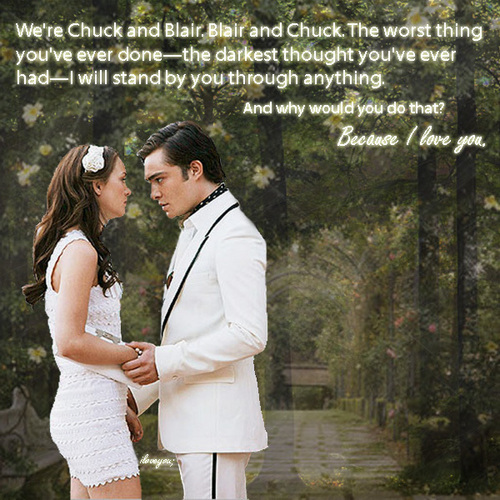 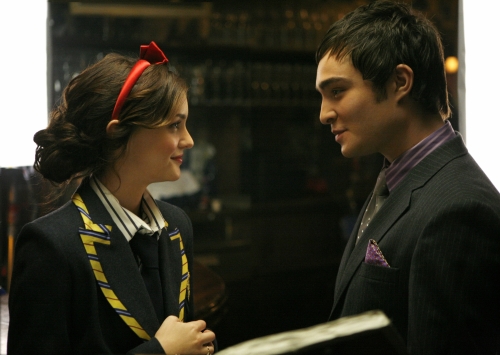 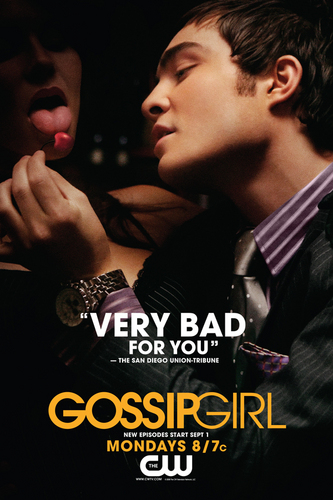 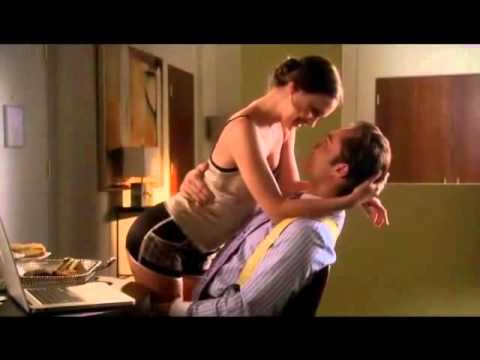