2
Fic: A Night of Passion + Booze = A Baby
posted by ellarose88
Title: A Night of Passion + Booze = A Baby
Author: ella-rose88
Word Count: 493
Rating: PG. light M (mention of sexual relations)
Characters/Pairings: Arthur & Gwen.
Spoilers/Warnings: Modern/AU fic.
Disclaimer: I do not own Merlin, it belongs to BBC and Shine. If I did it would have ended very differently and A/G would have had 3 children!
Summary: A surprise is in store for Arthur and Gwen...
A/N: This was written as part of the link over at link. The prompt was: Arthur/Guinevere and stupidity from 2sam11.

As always, komentar and feedback are greatly encouraged and appreciated!

God, I can’t believe this is happening!

Gwen thinks as they both wait for the count down on the timer. Arthur’s sitting on the edge of the bathtub, his elbow resting on his knee, his hand fisted under his chin. While Gwen is busy anxiously pacing up and down in the small bath room, which feels smaller now, as if it is closing in on her.

Okay maybe it’s not that much of a surprise; considering the amount of times we have sex. But still!

Usually Gwen was very particular and cautious when it came to contraception, not only was she on the pill, but they also used condoms. But one night, it was Arthur’s half-sister Morgana’s 26th Birthday and Gwen was elated that she could finally have a fun night out after battling a bad infection for the past two weeks. She was a kindergarten teacher, so illness was very frequent to her.

Of course, it being Morgana’s birthday, they partied hard, danced up a storm and things got very heated and passionate between many couples, especially Arthur and Gwen. So much so that she forgot that taking antibiotics reduces the effectiveness of the pill.

Arthur head snaps up, as he looks across to Gwen, the timer having gone off. Though Gwen sees anxiety in his eyes, she also notices something else -- something almost along the lines of excitement. Sure, they had only been seriously dating for 10 months -- though if Gwen was honest with herself she had been in cinta with Arthur since she was 14 -- so surely it was too soon to add a baby to the mix. Wasn’t it?

Time seems to stand still as she stares at the stick, too nervous to pick it up. She is too busy, her mind running a thousand circles that she doesn’t notice that Arthur has jumped up from his position to membungkus, bungkus his arms around her in a soothing, yet surprisingly encouraging embrace.

“Whatever that stick says, Guinevere, know that I cinta anda very much and you’ve made me so very happy. And if you’re pregnant, know that I’ll be happy with whatever anda decide.” She hears him whisper to her reassuringly, giving her the strength to finally pick the pregnancy test up and turn it over.

“Well,” is all Gwen can get out as she sees the positive sign staring back at her. She’s shocked. Yes, she always wanted to start a family and while at first when she began to notice the signs that she might be pregnant she was scared and hesitant about starting a family so soon. There is something about the look in Arthur’s eyes when she turned to look up at him, the words of reassurance he offered before the results, that makes her think that maybe being pregnant right at this moment isn’t so bad.
mrshafiz1 and AuthorForPooh like this
6
The Dreams of a queen - part 2
posted by kbrand5333
Part 1: link


“Merlin?” Gwen gasps, blinking her eyes and wiping her face.
“I’m… I’m sorry, Gwen,” he says, his voice soft, almost inaudible.
She stands and walks to him. “Sorry? You’re sorry?” she exclaims. “You were supposed to protect him! anda were supposed to take care of him, make him better!” she shouts, tears starting anew, and she realizes she is pummeling his thin chest with her clenched fists.
“You were supposed to bring him halaman awal to me!” she sobs, pounding him mercilessly....
continue reading...
Can queen Guinevere keep the takhta for long?
posted by Lucerne28 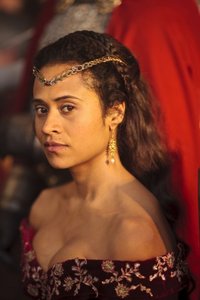 With the way things are playing out, e.g. fast meneruskan, ke depan to Camlann with no creation of the golden age, and it is looking lebih and lebih like Arthur is going meet his end. How the HELL is Gwen going to keep the crown? She is a non-royal/no royal blood, a former serving girl, sitting on a takhta wherein the military has been weakened oleh a war. If Merlin leaves to fulfill his destiny, atau at this point looking lebih and lebih likely that he will be touring the world embellishing the tale of King Arthur and sorcerer Merlin so that the legend of Merlin and King Arthur is created, who atau what is going...
continue reading...
Marriage oleh Agreement (Medieval Arwen) - chapter 2
posted by sportyshuie
link

Arthur yawns and motions for the servant to fill his goblet. The food on his plate is still untouched. He isn’t hungry; in fact he is bored and beside him, his father is enjoying himself with his council members. He looks beyond his father and notices his step mother is engaged with her own group of friends. Sighing, Arthur rues why he agreed to gabung the feast in the first place. He didn’t want to disappoint his mother even though he knows how boring feasts like this are. And now he wishes he hadn’t promised her. He could be elsewhere right now, enjoying the...
continue reading...
3
Flight - Part 8
posted by kbrand5333
Part 7: link


“Ouch,” Gwen complains, squirming as the rough bark of the pohon suddenly makes itself known.
“Don’t squirm atau we’ll end up starting over again,” Arthur chuckles into her neck. He is still holding her in his arms, still joined with her, still regaining his breath.
“The pohon is uncomfortable,” Gwen says, ciuman his forehead.
“Sorry,” Arthur apologizes, and slowly lowers her to her feet. He grins when he sees her trousers hanging half-off, one boot still on.
“I...
continue reading...
4
Flight - Part 6
posted by kbrand5333
Part 5: link


“I’m sorry,” Gwen flushes, “I wasn’t expecting guests for dinner, um…”
“It’s alright, Gwen, Percival and I already ate,” Lancelot says quickly. “You and Merlin go on ahead.”
Merlin looks at Lancelot. So does Percival. Merlin sees the brief surprise flitting across Percival’s face and he knows that the two men haven’t eaten.
Gwen’s back is to them, fixing their plates, so she doesn’t see the exchange, something for which all three men are thankful.
“We’ll...
continue reading...
3
Flight - Part 4
posted by kbrand5333
Part 3: link


“Dinner!” Guinevere calls from the doorway of the modest house the three of them have been sharing for this last bulan and a half.
Arthur and Merlin lift their heads, grateful to be able to come in out of the sun. The cool breeze drifting from the sea helps cool their skin, but the sun is relentless. Arthur’s skin has turned golden from the exposure and his hair is a shade lighter. Merlin has put on a few pounds of muscle and has a perpetual sunburn.
Arthur splashes in the water barrel, cooling himself and...
continue reading...
Fic: Apart But Not Forgotten [Chapters 2 & 3]
posted by ellarose88
Title: Apart But Not Forgotten, Chapter Two: Virginity
Author: ella-rose88
Pairing/Character: Gwen, Arthur/Gwen
Rating: PG, light M.
Word Count: 948
Warnings: Set during series 4 episode 11 & 12. AU after episode 10.
Prompt: Virginity.
Summary:She may be gone, but Camelot is still with her. In the detik chapter, Gwen remembers her first night with Arthur.
A/N: This was written for the Square meja Challenge over at square-table. The Theme for this chapter is Virginity.

This chapter has not been beta’ed so any errors are my fault. Once again komentar are very much appreciated ♥!

Guinevere has taken the hari off. She and Arthur are moving her things to Arthur’s flat. They’ve been making runs back and forth all day, and have taken a break to eat a makan malam of kari takeaway.
Morgana comes halaman awal during their dinner, and she retrieves a plate for herself and sits.
“How’s it going?” she asks them as she pokes through the boxes and scoops some dishes onto her plate.
“Almost done. I think we can get the rest in one lebih trip,” Gwen says....
continue reading...
4
api - Part 23
posted by kbrand5333
Part 22: link


Arthur wakes before Gwen. He decides to get up and shower, so that they can have plenty of time to get to her apartment before his father’s. He is able to reach up enough to wash his own hair, which makes him happy. When he returns to his room, he finds Guinevere awake, which also makes him happy.
“Good morning, love,” he says, leaning to ciuman her. She offers a cheek, which he kisses, then scowls.
“I haven’t brushed my teeth yet,” she tells him.
“I don’t care,” he tells...
continue reading...
6
Why this Guinevere will be in my opinion the best version of the queen
posted by AngelGirl1992 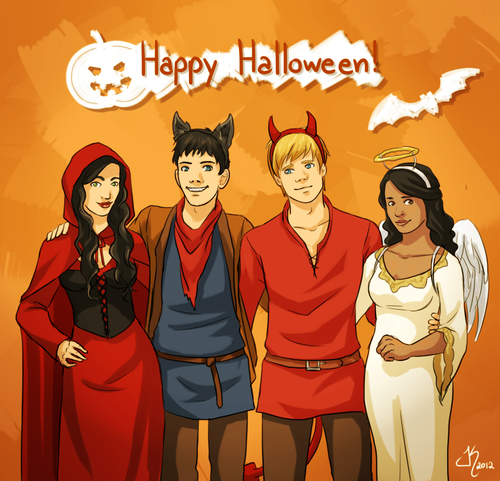 Am taking requests now to continue the game. These selanjutnya three are requests from some of my fanfiction.net lovelies. Feel free to send me your suggestions, too.


“Arthur, remember to be quiet. It’s late; Gwen might be sleeping,” Merlin says softly outside the doors to the royal chambers.
“Merlin, Guinevere always waits up for me, anda know that,” Arthur replies, but Merlin does notice that he is speaking in hushed tones as well.
Merlin opens the door carefully and Arthur walks in. The room is mostly dark,...
continue reading... 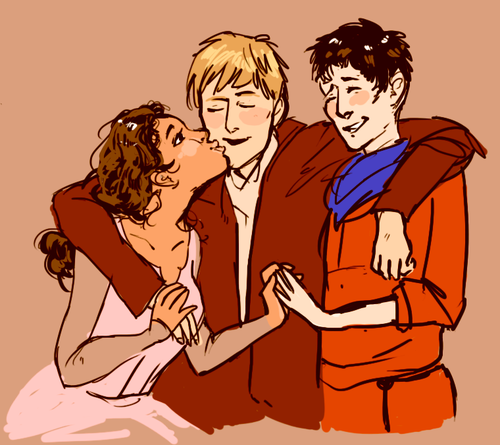 3
The OT3 (Fanart) Awwww This Is Lovely
added by EPaws
Source: proltergest: 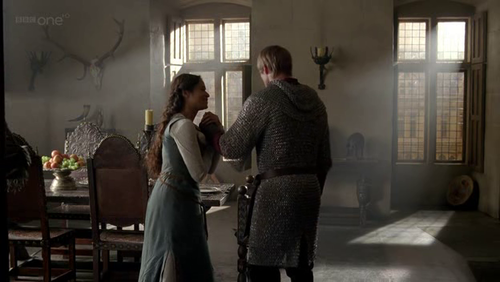 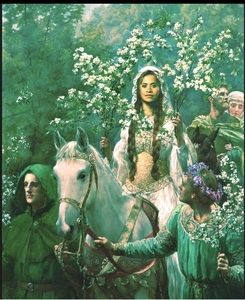 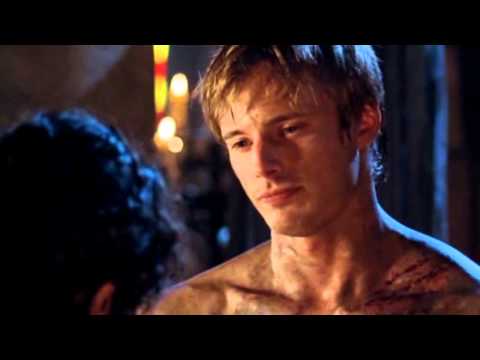 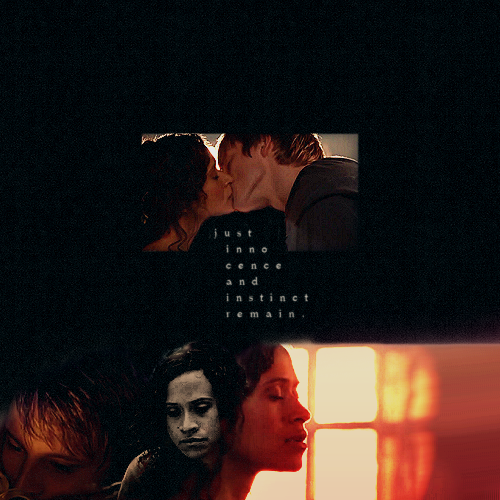